Arsenal: Arsene Wenger fails to mount a case for the defence 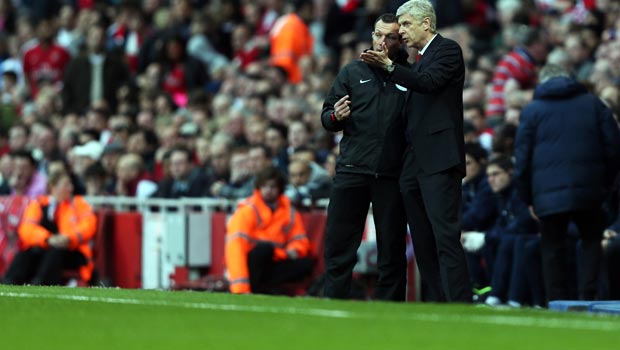 Arsene Wenger admits he remains baffled as to why his side’s defence has fallen apart so badly in the second half of the season.

Only once in the first 15 matches of the Premier League season did Arsenal concede more than one goal in a game – and that was in the opening day 3-1 defeat to Aston Villa.

The 6-3 hammering at the hands of Manchester City in mid-December was seen as a one-off, especially as they went on to concede only two goals in their next six games.

But over the last month there has been no papering over the cracks, with the opposition finding the back of Arsenal’s net on 12 occasions in four matches.

“What has been strange in our season is that for a long time we looked very strong defensively, we had an outstanding defensive record, and we lost it suddenly. That’s the surprise of the season for me,” he said.

The FA Cup, though, has brought the best out in Arsenal and no-one can say they have had an easy ride into the last four after wins over Premier League leaders Liverpool, local rivals Spurs and Everton, as well as lower league Coventry.

Speaking ahead of Saturday’s semi-final against Wigan, Wenger admits the FA Cup, which he has won three times as Arsenal boss, remains a ‘special’ competition.

“We all play to win something and if you are in the FA Cup everyone can dream of winning it at the start of the season,” he told www.arsenal.com.

“The title – only seven clubs can dream of winning it at the start of the season.

But the FA Cup is a dream open to everybody and that is the beauty of the competition.”

“Last year Wigan won it, this year you have Sheffield United in the semi-final.

In the championship you can talk and talk but we know the biggest teams will win it.

That open dream is what makes the FA Cup special in football,” he added.

“If you play basketball or rugby – any other sport – you cannot open the dream to anyone other than the top teams.

In basketball, if you play against a team from Division Two, there is absolutely no chance unless you give them 30 points.

Only our sport can create that excitement because it is uncertain.”