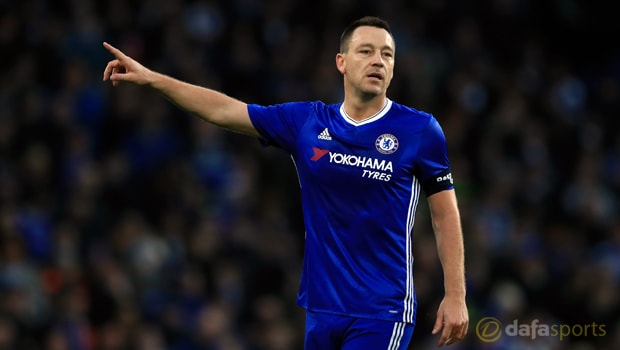 Antonio Conte says there is no rush to sort out the future of John Terry and the Chelsea manager will look at the contract situation closer to the end of the season.

Terry has been at Chelsea since joining the youth ranks in 1995 and he made the step-up to the senior team just three years later, making his debut as a late substitute in a League Cup tie with Aston Villa in October 1998.

The former England international has gone on to become a club legend and he has made well over 500 appearances across all competitions in a trophy-laden time at Stamford Bridge.

However, the experienced centre-back has been used sparingly this season and he has only featured in five Premier League games under Conte, who took charge last summer.

The 36-year-old was handed a start for Sunday’s 4-1 FA Cup third-round win at home to Peterborough but he was shown a straight red card for a last-man foul on Lee Angol – a decision the Blues are likely to appeal.

Question marks have once again been raised about the future of Terry, whose contract expires at the end of the campaign, but Conte says this matter will be resolved in due course.

“This type of decision is important to make with the club and not alone,” he said.

“He is helping me a lot in the changing room and he has shown me he is a good player and above all, a good man.

“Now it is important to continue in this way because now we have the second half of the season, and with the FA Cup, we will have a lot of commitments. Then we will see.”

Table-toppers Chelsea, who are 1.73 favourites to win the title, are back in league action on Saturday when they make the trip to defending champions Leicester City.

The Foxes are quoted 6.00, the draw is priced at 3.80 while the visitors, who were beaten 2-0 by Tottenham in their last league outing, are 1.60 favourites.