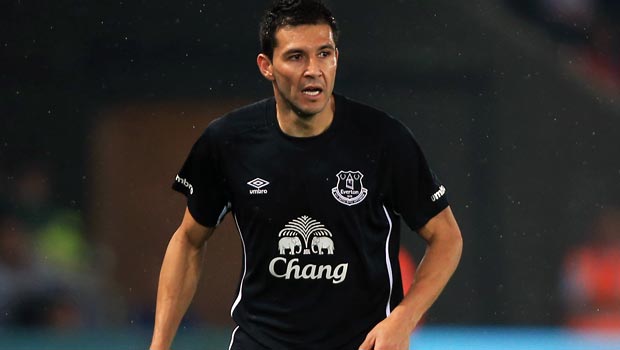 Everton defender Antolin Alcaraz is hopeful he can take advantage of John Stones’ serious injury to establish himself in Roberto Martinez’s starting line-up.

The Toffees were dealt a huge blow this week when it was confirmed that promising defender Stones would miss up to four months with the ankle injury he suffered in the defeat to Manchester United.

Alcaraz has plenty of sympathy with Stones having suffered with his own injury problems since he moved to Goodison Park from Wigan in 2013.

The Paraguay international managed just six Premier League appearances for the Toffees last term due in part to fitness issues and has had just one run out so far this season.

The 32-year-old now hopes that in Stones’ absence he can finally show the Everton fans what he is capable of, especially with the Merseysiders looking to compete domestically and in Europe.

He told the Liverpool Echo: “It’s going to be hard for John. I’ve been in his position and I know it’s difficult to keep your head up in the days after it happens. He’s started so well this season that he will be low at the moment. He has put in some very good displays but there’s nothing he can do about it now. If he stays positive it will help him heal quicker.

“As for me I’ll just work hard in training and keep going. As a player you prefer not to get a chance in this way, through a team-mate being injured. He’s got a very bright future ahead of him.”

Everton’s defence has been their Achilles’ heel this season but Alcaraz believes there have been encouraging signs in their recent outings.
“If you look at it we are improving,” he added. “There are things to improve on and we need a better position in the table but we can do that. We need to put Everton in the real position in the table where they should be.”

Everton face Aston Villa after the international break and are 1.51 to pick up just their second league win of the season.The Villans, who have lost their last three matches, are 6.55 with the draw 3.92.