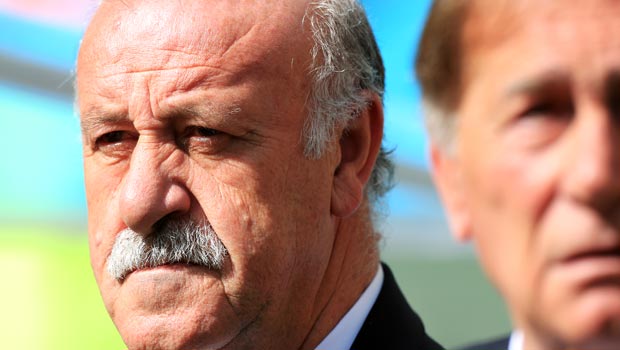 Spain coach Vincente Del Bosque is hoping his forwards rediscover their scoring touch against Luxembourg on Sunday after their shock Euro 2016 qualifying defeat to Slovakia.

The 2010 World Cup winners and defending European champions were stunned in Zilina on Thursday as Slovakia pulled off a 2-1 victory. Goals from Juraj Kucka and Miroslav Stoch condemned Spain to a first qualifying defeat for eight years.

It means Spain now have three points from two games in Group C and are looking to get their qualifying campaign back on track when they travel to Luxembourg on Sunday.

After a miserable World Cup summer, where Spain limped out of the competition in Brazil in the group stages, Del Bosque is under increasingly mounting pressure.

This is a Spain team that has lost key players, such as the retired trio of Xavi, Xabi Alonso and David Villa, and they are struggling to reach the standards that saw them win the World Cup and back-to-back Euro titles in 2008 and 2012.

Del Bosque admitted to Spanish radio station AS that the team are “not in good spirits” after such a defeat and he is hoping they can be more clinical against the minnows of Luxembourg than they were in the Slovakia game.

“The issue was that we were unable to score like in other games,” said Del Bosque. “We had a lot of chances but they didn’t result in a goal.

“It’s difficult to explain. We’re not getting any luck. We had a lot of control and couldn’t have more. We lacked the touch in front of goal that we’ve had at other times.”

Slovakia will be hoping to maintain their position at the top of Group C when they travel to Belarus on Sunday. Belarus are 3.20 to win the game, while the draw is 3.08 and Slovakia are at 2.26.