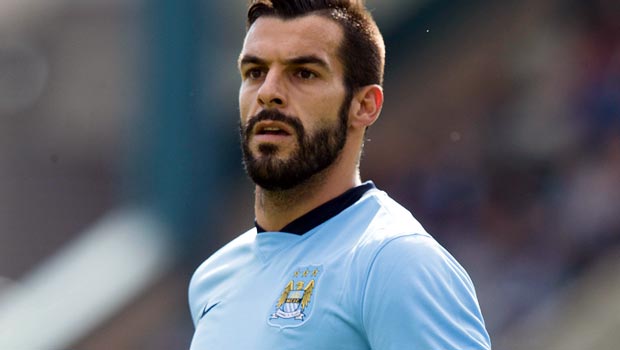 Manchester City boss Manuel Pellegrini has played down speculation over Alvaro Negredo’s future at the club, insisting he remains part of his plans.

The Spain international has been strongly linked with a return to his homeland this summer after struggling towards the back end of last season.

Having started the 2013-14 campaign as part of Pellegrini’s first-choice strike force alongside Sergio Aguero, Negredo found his place in the starting XI snatched away from him by Edin Dzeko.

Negredo failed to score in the final four months of last season and the 29-year-old was reported to be considering his future at the Etihad Stadium.

Atletico Madrid were reportedly interested in the former Sevilla man, while Valencia were also said to be monitoring the situation.

With City needing to sell some of their foreign contingent to comply with Premier League and Champions League rules, it was expected Negredo would leave.

However, Pellegrini says that since Negredo suffered a foot injury the interest in him has dried up and he claims the powerful forward has a role to play in a City side who are 3.10 to be the highest scoring team in the Premier League this season.

Pellegrini said: “Maybe one month ago some Spanish clubs had an interest in him but that was one month ago. At this moment, Alvaro is injured but part of our squad.

“Last year he did very well and then had an injury with his shoulder. After that, he didn’t play so well but he’s always an important player for us. We don’t want to sell him. We want him to stay with us.

“For the moment there is no news, for Negredo or anybody. We are not receiving any offers for any players.”

Pellegrini added that Scott Sinclair, Micah Richards and John Guidetti had all been put up for sale and he has urged them to find new clubs as they do not feature in his plans.