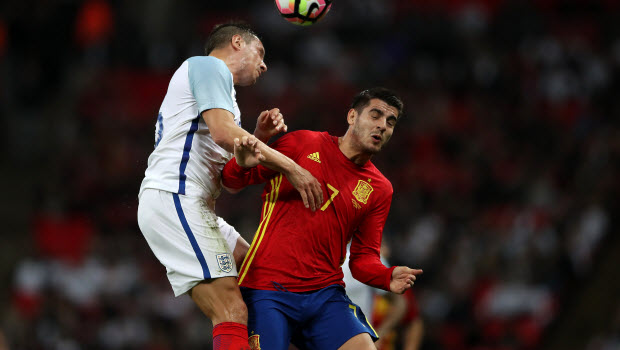 Real Madrid have been hit with the news that Alvaro Morata is likely to be out for a month after damaging his right hamstring while away on international duty.

The striker came off the bench for the final quarter of Spain’s dramatic 2-2 draw with England on Tuesday, a move that came as somewhat of a surprise having been substituted during Saturday’s win over Macedonia due to a knock.

After returning to Madrid, the striker underwent a series of tests on Wednesday and it has now been confirmed he has suffered a hamstring injury.

A statement from the club read: “After tests carried out on our player Alvaro Morata at the Sanitas La Moraleja University Hospital prior to the training session held today, Wednesday, he has been diagnosed with a grade 2 muscle injury in his right hamstring.

His recovery will continue to be assessed.” Although a return date has not been set for the 24-year-old, injuries of this nature usually take around a month to heal, ruling him out of a number of important upcoming games for Los Blancos.

Saturday sees them travel across the Spanish capital to face title rivals Atletico Madrid, a game they are 3.00 to win, with the draw 3.30 and Los Colchoneros priced at 2.50.

The first El Clasico of the season is also on the horizon, while Real are still to guarantee their place in the knockout rounds of the Champions League.

Morata’s injury is the latest fitness setback to hit boss Zinedine Zidane, with Gareth Bale, Karim Benzema, Casemiro and Mateo Kovacic all nursing knocks ahead of the game at the Vicente Claderon, although Sergio Ramos and Luka Modric should both be fit to feature.