Alexis Sanchez frustration only a minor concern for Arsene Wenger 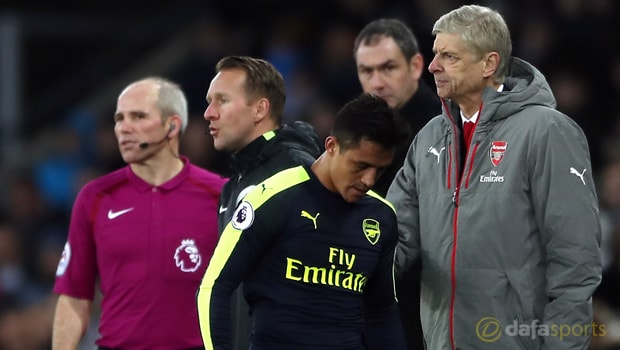 Arsene Wenger has been quick to play down the latest show of frustration from Arsenal’s leading goalscorer Alexis Sanchez.

The Chilean scored Arsenal’s final goal in the 4-0 weekend win over Swansea but was substituted shortly afterwards by Wenger.

Sanchez kicked away his gloves before proceeding to sit sullen on the bench underneath an overcoat.

Just a couple of weeks ago, Sanchez laid bare his frustration after Arsenal failed to win at Bournemouth, despite coming from three goals down to rescue a draw.

The former Barcelona player has 18 months remaining on his current Arsenal contract and, to date, the club have been unable to agree an extension.

Sanchez and Mesut Ozil, also substituted at Swansea and with the same timeframe on his Arsenal deal, are seen as key to the Gunners ambitions going forward but Wenger played down any suggestion of frustration from the former.

“Looking at the [Swansea] game, that is really minor, minor, minor,” he said. “All players are frustrated when they come off – some show it, some don’t.

I am long enough in the job to know that. “He’s a good guy who gives a lot and wants to do well, always, for the team. There is no problem.”

Having highlighted that players from different cultures deal with their emotions in different ways, Wenger stood by his decision to remove Sanchez and Ozil with the three points long secured in south Wales.

“Look, he is hugely influential, Sanchez, but we also had players on the bench who are strikers, who need competition.

We were 4-0 up. Ozil as well comes back from sickness so it was a good opportunity not to be stupid,” added the Gunners boss. Arsenal are 12.00 to win the title this season.