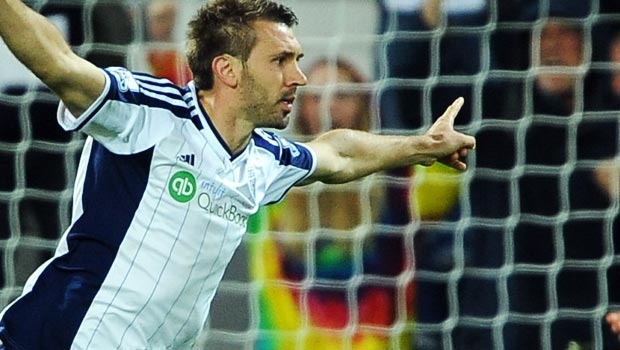 West Brom are hoping to hold on to defender Gareth McAuley, as he enters the final year of his deal at The Hawthorns.

The 34-year-old joined the Baggies from Ipswich in 2011, and has made over 100 appearances for the club, scoring seven Premier League goals.

Although he is out of the team at the moment, due to the summer signing of Joleon Lescott and the form of Craig Dawson, Baggies boss Alan Irvine has said that the Northern Irishman could get his chance at any time.

“I wouldn’t want to lose Gareth. I know Gareth is desperate to play but his opportunity to play could come at any moment,” Irvine said.

“I said right from the beginning, when we brought Joleon (Lescott) in, that we need four Premier League centre-backs here and we’ve got four.”

Irvine went on to add: “He’s got to wait for his chance to come and he’s got to take that chance and the way he played against Hull showed he was ready and he won’t let us down if that chance comes.”

McAuley is a regular for his country, and scored the opening goal in Northern Ireland’s 2-0 win over the Faroe Isalands in their Euro 2016 Qualifier.

He will be hoping that his impressive international displays will be enough to get a place at his club side, who are due to face Manchester United on Monday October 20.

West Brom are available at 4.49 to beat Louis van Gaal’s men, with United installed as the 1.72 favourites and the draw at 3.76.