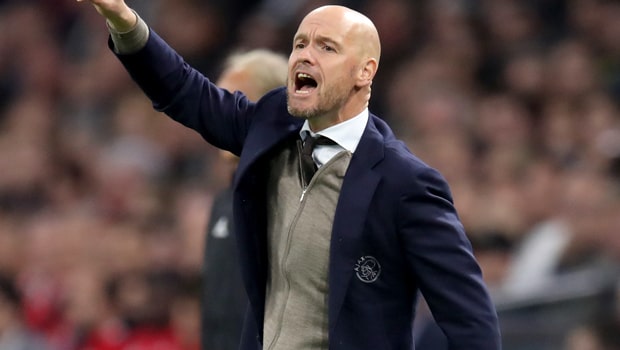 Ajax manager Erik ten Hag felt his side had come close to footballing perfection in their demolition of Real Madrid at the Bernabeu.

The three-time defending European champions went into the last-16 second leg with a 2-1 advantage after their meeting in the Amsterdam Arena but Ajax were supreme in Madrid and ran out comfortable 4-1 winners at the Bernabeu – their first away win in a Champions League knockout game in 22 years.

Knowing they had to score at least twice on the night, Ajax achieved that feat inside 18 minutes as Hakim Ziyech and David Neres silenced the Madrid faithful.

Former Southampton winger Dusan Tadic was the provider for both goals and he scored a sumptuous third just beyond the hour-mark, curling a shot into the top corner to put his side 4-2 ahead on aggregate.

Marco Asensio did pull one back but a fine free-kick from Lasse Schone outfoxed Thibaut Courtois and sealed a famous success for the Dutch side. It is a first Champions League quarter-final for Ajax in 16 years and their manager had no doubt they were fully worthy of their progress.

“This was pretty close to perfection,” Ten Hag said afterwards. “Over the two matches we definitely deserve to progress to the next round.”

There will be plenty big names in the hat when the draw for the quarter-finals is made next week but, having been paired with the three-time defending champions already, Ajax won’t be fearing anyone now, says their manager.

“I have no influence on the draw, so I’m not going to think about it,” he added.

“All the possible opponents are big teams – but so were Real Madrid.” Ajax are 29.00 to win the Champions League this season.