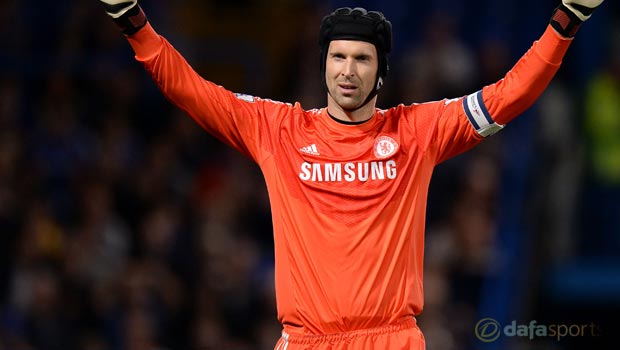 The agent of Petr Cech has confirmed the Chelsea goalkeeper is ready to quit Stamford Bridge in the summer as he goes in search of first-team football.

Cech has had to play second fiddle to Thibaut Courtois this season as Chelsea have marched to the Premier League title and the situation is unlikely to change in the next campaign.

Arsenal, Liverpool and Manchester United are all keen to keep him in the Premier League, while Paris Saint-Germain and Real Madrid could offer him a fresh challenge on the continent.

Blues boss Jose Mourinho would prefer it if he did leave England but has always said the final decision will be made by club owner Roman Abramovich.

Cech’s agent, Viktor Kolar, has also confirmed that Abramovich will have the final say and believes his client would jump at the chance to stay in the Premier League.

“Arsenal, United or PSG are all top clubs and Petr would like to join one of them – definitely,” he said.

“Petr expects that (owner) Roman Abramovich, not Mourinho, will decide about his future, based on their mutual agreement from last year.”

Cech, who turns 33 on Wednesday, is still under contract at Stamford Bridge and Mourinho has said it will take big money to lure him away when the transfer window re-opens.

Cech’s last game for the club will be this weekend when he is sure to take part in some of, if not all, of the clash against Sunderland.

Chelsea are hot 1.44 favourites to wrap up their title-winning season with another victory.