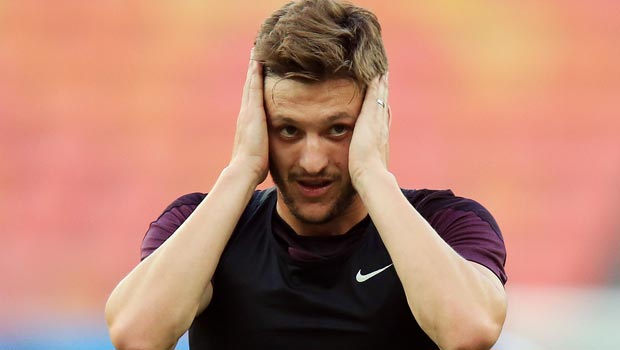 Adam Lallana is set to miss the start of the new Premier League campaign after picking up a knee injury in pre-season training with new club Liverpool.

Lallana, 26, joined Liverpool earlier this month and has spent the last couple of weeks on a pre-season tour of the United States.

But he has now suffered a setback at his new club after sustaining a knock to his lateral collateral ligament during a session at the Reds’
Harvard University training base in Boston.

Liverpool have not placed a time-frame on the injury or Lallana’s return to full fitness but injuries of his case can result in up to six weeks on the sidelines.

The England midfielder is now expected to miss the start of the upcoming campaign and the first match of the season against his former club Southampton at Anfield on August 17.

Lallana, a boyhood Everton fan, will now undergo further assessment by the club’s medical team but they have confirmed he will not require surgery.

He joined Liverpool this summer for £25million after an impressive season for the Saints in 2013/14.

The Reds are also closing in on signing Saints defender Dejan Lovren for £20million and QPR striker Loic Remy while Nicolas Gaitan, another Benfica winger, continues to be linked.

Brendan Rodgers’ side, who came close to lifting their first ever Premier League trophy last season, are priced at 9.50 to win the league in 2014/15.

The Reds are also priced at 1.41 to beat Southampton in their opening match of the season, with the Saints available at 6.24 and a draw at 4.34.