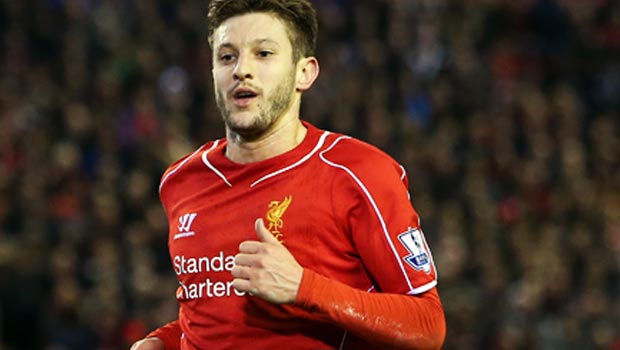 England international Adam Lallana says Liverpool are “creeping up” on Manchester City and the midfielder is hopeful of finishing second in the Premier League this season.

Many were expecting another title challenge from the Reds this year after their runners-up spot behind the Citizens last term but poor early performances saw it fail to materialise.

Liverpool struggled in the first half of the season and they were down in mid-table having only recorded six wins from their opening 13 Premier League games.

The form in the Champions League was even worse and the former European champions were knocked out in the group stage, with Real Madrid and Basel advancing into the knock-out stage.

However, the Reds have been a revelation since the turn of the year and Brendan Rodgers’ team are yet to taste defeat in 2015 as they continue their quest for a European position.

Eight victories have been recorded from their last 10 Premier League games and the club are still in the FA Cup, with a quarter-final replay against Blackburn Rovers taking place on April 8.

Liverpool are currently fifth in the table but a win against Manchester United on Sunday at Anfield and they would move into a Champions League position.

Lallana is targeting a higher finish and the former Southampton captain now has second-placed Manchester City in his sights, with the Citizens four points ahead.

“City have been in indifferent form lately and we beat them a couple of weeks ago, so we are creeping up on them,” Lallana said. “We’ve been on a great run at the moment and hopefully it can continue.”

Liverpool are favourites at 2.12 to beat United on Sunday while the visitors are priced at 3.44 as they look to build on the 3-0 win over Tottenham last time out.