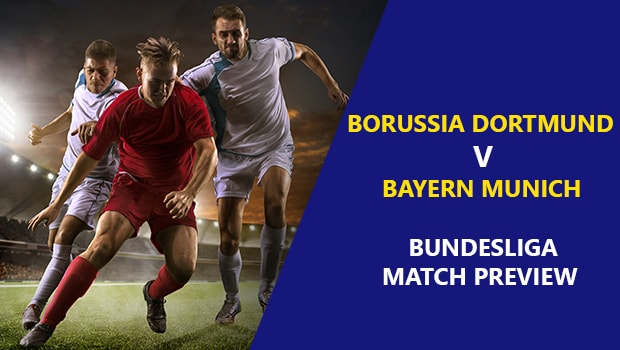 It’s matchday 28 in the Bundesliga, and tonight’s game promises a lot of sparks even without the fans to support as many will be watching from home. Borussia Dortmund, who is second on the log table, welcomes table toppers and defending champions Bayern Munich.

Since the return of football after being halted two months ago due to the coronavirus pandemic,  Bundesliga has resumed footballing action, and with both teams picking up six points from two games so far, they will look to get at least a win or draw to keep the pace of the title race going.

Lucien Favre’s men will look to put up a strong performance against the Bavarians as this will send a strong statement to their rivals and other teams in the Bundesliga.

Dortmund last won the league in 2011/12 season, and they will be aiming to stop the dominance of their opponents this season, although four points might separate them. However, If they could get a win, they will be just a touching distance between both teams.

Bayern, on the other hand, has continued their impressive form since the return to football as they beat Union Berlin 2-0 before dispatching Eintracht Frankfurt 5-2 on Saturday lunchtime after Frankfurt threatened to claim a comeback from 3-0 down. Still, the Munich outfit outclassed their opponent and remained on course on the title race.

Dortmund will be hoping to rely on their impressive forward Erling Braut Haaland as the 19-year old has been brilliant this season, scoring in almost every game. Bayern must be wary of the threat posed by the teenager and the likes of Julian Brandt, Emre Can, Reyna, Jadon Sancho pulling strings in midfield and the flanks.

Bayern also is a force to reckon with as they possess a lot of arsenals in their attacking department Hans Flick side has been scoring goals with reckless abandon with Robert Lewandowski doing the business, and the phenomenal Alphonso Davies at the back will cause the Dortmund, the defense a lot of problems.

Bayern Munich is tirelessly working on the fitness of their experienced center back Matt Hummels after he was replaced in the game against Wolfsburg on Saturday with the likes of Witsel, Zagadou, Schulz, and Reus out with Injury this allows for Brandt to play a more profound role as Jadon Sancho looks set to get back into the starting line up after coming from the bench in their last game.

Bayern, however, will miss the services of Phillippe Coutinho, Corentin Tolisso, Niklas Sule, and Thiago due to ankle injuries, respectively. But the best, however, is that Serge Gnabry looks set to return to the starting lineup alongside Coman and the impressive Thomas Muller, who has 17 assists to his ranks in the Bundesliga supplying the deadly Lewandowski up front.