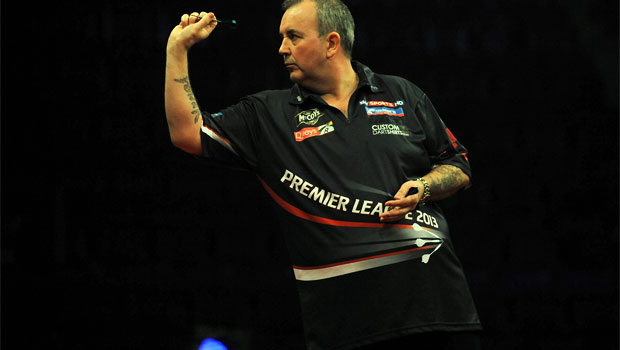 PDC World champion Phil Taylor has been handed a tough task in his bid to win the Grand Slam of Darts for a fifth time.

The Stoke legend, who beat his protege Adrian Lewis in the inaugural Coral Masters at the weekend, has been drawn in Group A with Kevin Painter and Paul Nicholson, both former winners of the Players Championship, while rising star Stuart Kellett joins them as one of four wildcard qualifiers.

Taylor suffered a slight dip in form at the start of the year, but normal service has resumed judged on his demolition of James Wade in the Masters semi-final, followed by his one-sided success over Lewis in the final on Sunday, and although the draw could have been kinder, he is still the one to beat.

Michael van Gerwen, this year’s Premier League Darts champion, is fancied by many to prevail, and the number four seed has a good draw in Group D, having to face Belgian Kim Huybrechts, Dean Winstanley and compatriot Vincent van der Voort.

The action gets underway on Saturday at the Wolverhampton Civic Hall, with the first four days seeing six sessions of Group Stage games.

The top two from each group will progress to the knockout stage from the last 16 onwards, with both the semi-finals and final taking place on Sunday 17th November.