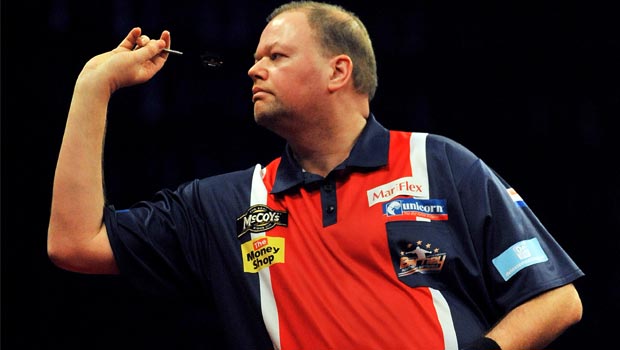 Raymond van Barneveld will look to continue his impressive head-to-head record against Scot Peter Wright in the Leeds leg of the Premier League Darts season.

The Dutchman, currently 11th in the 2014 earnings list, has won five, drawn one and lost only once against Wright, who leads the field after a brilliant debut season to date.

But with just four points separating the top seven players, the 47-year-old Barneveld says it takes a brave man to predict anything in this most competitive of seasons.

“It’s a fantastic competition and you have to be focused every week,”
said van Barneveld. “It’s a tough schedule but there are no easy games
– every player is so close to each other and it’s the tightest Premier League I’ve been involved in.

“Peter’s doing really well. He had a fantastic run in the World Championship and did himself and his family proud.

“He’s a top class player, and he’s proved that by being undefeated after six weeks in the Premier League, so I’m really focused and looking forward to it.”

With Premier League Darts coming to Leeds for the first time tonight, a raucous atmosphere is expected at a sold-out First Direct Arena.

And the five-time World Champion is hoping that the support of an 11,000-strong crowd can lift him to even greater heights.

Barneveld has claimed the prized scalp of fellow Dutchman and World Champion Michael van Gerwen this season and is in third place in the table after picking up eight points from six matches. His last two outings have ended in draws though.

He said: “Hopefully the crowd will sing “Barney Army” and I can get a win, but I’ll have to play better than I did last week (v Dave Chisnall).

“I’m not happy with my scoring but my finishing has been good.”