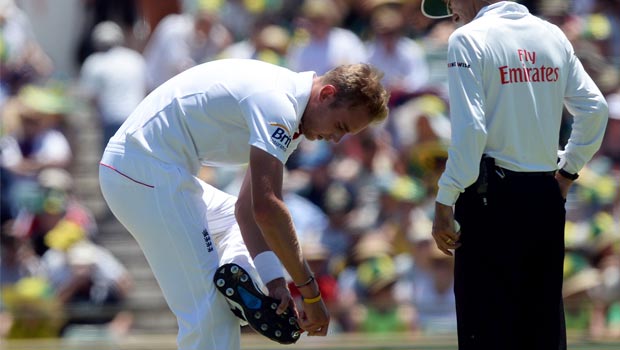 England will go into their World T20 opener against New Zealand on Saturday in poor form and possibly without captain Stuart Broad.

A 20-run loss to India in Wednesday’s warm-up means they have now won just one of their last eight games in the shortest format of the game.

England had India at 39-3 after winning the toss and deciding to put the opposition in to bat, but an unbeaten 73 off 47 balls from Virat Kohli and an equally quick-fire 54 off 31 balls from Suresh Raina helped India amass a very respectful 178-4 from their innings.

Michael Lumb and Alex Hales got England off to a flying start with an opening stand of 43 from 30 deliveries before Hales was dismissed for 16.

Lumb and Eoin Morgan then lost their wickets attempting big hits to leave Moeen Ali with the job of steering England home.

Ali top scored with 46 from 38 balls and established a 41-run partnership with Joss Butler in 3.4 overs to give England hope of reaching their target.

But both players eventually fell and when Ravi Bopara went for six the game was up.

Broad missed the game and England’s first warm up match – a defeat to the West Indies in Bangladesh – due to tendonitis in his right knee.

Even so, spinner James Tredwell is confident that he will make the game against the Black Caps.

Tredwell said: “He’s heading in the right direction and I’m sure he’ll want to get on the field on Saturday and play.

“He’s one we ink into the 11 and his leadership skills are part of his role. We’ve got Eoin Morgan, who’s done brilliantly (captaining) on the field, but Stuart has been involved in the planning and how we go about things out in the middle.

“He’s taken a full role when he’s been out and when he is fit he will take over.”

After five days of qualifiers, the World T20 gets underway for real on Friday when India take on arch rivals Pakistan in what should be a real fire cracker of a match in Mirpur.