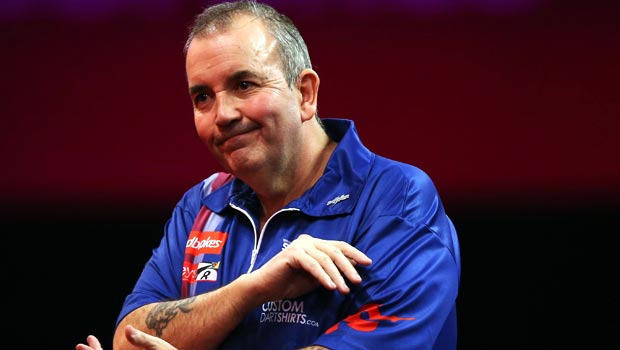 Reigning champion Phil Taylor admits he is “feeling good” about his game after reaching the World Matchplay semi-finals with a comfortable win over Wes Newton.

Taylor cruised past Newton on Friday with a 16-6 victory, a win that included a run of seven straight legs and a 160 finish in the ninth leg.

The Stoke-born thrower is a 14-time champion of the event and is bidding for a seventh straight Winter Gardens triumph.

And after booking his place in an eye-catching semi-final against Gary Anderson, ‘The Power’ said he was pleased with his form.
“I’m feeling good. Wes is a tough cookie – trust me he was up there to win,” Taylor told Sky Sports.

“You know, he was giving it large and he was 3-2 up and I was worried. He was up for winning.

“I think when he started losing it got his head down.”

But having fallen behind early on in the match, Taylor is now wary of his next opponent – one who could punish him if his darts are not up to scratch.

Speaking to the Professional Darts Corporation’s official website, he said: “My performance was okay but it won’t be good enough to beat Gary on Saturday and I’m excited about playing him. He’s played well all week and knocked out some great players.

“It will be a cracking semi-final and both games will be fantastic. Darts fans are in for a treat.”