Dutch duo divided ahead of World Cup of Darts 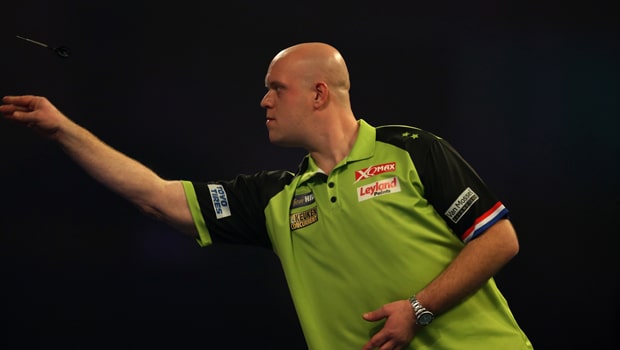 Michael van Gerwen says his former World Cup of Darts partner, Raymond van Barneveld, was ‘gutted’ to miss out on the Netherlands team this year.

The reigning world champion has teamed up with ‘Barney’ for the three most recent Dutch victories at the annual event but the 52-year-old’s ranking has dropped below that of Jermaine Wattimena, who gets the call-up this year instead.

In his final year as a professional, Van Barneveld’s last few months on the circuit are not really going to plan.

A string of bad results has seen him drop to 29th in the PDC Order of Merit – six places below Wattimena, so he will lose his record of being an ever-present over the eight years of the event.

“If I were in Raymond, I would be upset and I know he is,” said Van Gerwen. “But with all due respect, I think that Jermaine deserves this place.”

The Netherlands get their World Cup of Darts campaign underway on Friday when they take on Spain in the first round.

Van Gerwen will look to help his new partner overcome any nerves on the international stage as the Dutch attempt to go one ahead of England in the all-timer standings as both countries have won the World Cup four times.

He added: “I used to play with Raymond, he is, of course, a lovely back-up, I never played with Jermaine before so that’s going to be totally different.

“I hope I can give him some confidence, prepare for the match well and I hope we can do some good stuff again.”

Van Gerwen also has his eyes on some individual landmarks himself as he could tie Phil Taylor and Adrian Lewis with four World Cup wins.

The Netherlands are 1.13 to beat Spain on Friday, with their opponents 5.50 to pull off a shock win over the defending champions.