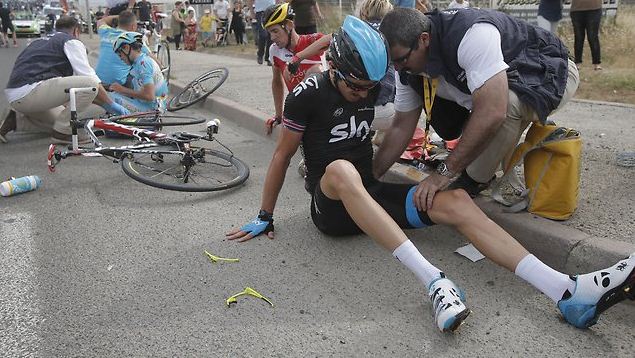 Geraint Thomas has admitted he may be forced to withdraw from the Tour de France after suffering a fracture to his pelvis.

The Team Sky rider suffered the injury during a crash on the opening day of the Tour but has shown immense courage since then to battle on and complete three stages.

Thomas managed to complete Tuesday’s team time trial as Sky finished third behind Orica Greenedge and Omega Pharma-Quickstep, and admitted afterwards that the injury had improved.

However, whether he can last the full length of a gruelling Tour remains to be seen and the Welshman admits there is a possibility he will have to withdraw at some point.

“It definitely feels like it’s improved over the past few days,” Thomas said.

“But at the same time if I feel like I still can’t do a job after a week or 10 days then the decision might have to be made to just pack up and go home.”

The loss of the 27-year-old would be a big blow to Chris Froome’s chances of winning the Tour as he was selected with a view to playing a big supporting role over the three weeks.

Thomas is now hoping the injury continues to improve so he can continue to work for Froome and the rest of the team.

“It still obviously hurts, but it’s a lot less than the first two days,” he added.

“Hopefully it keeps improving and then by the second half of the Tour I should be back to maybe not full fitness, but be able to do a good job for the team and what I came here to try to do really.”