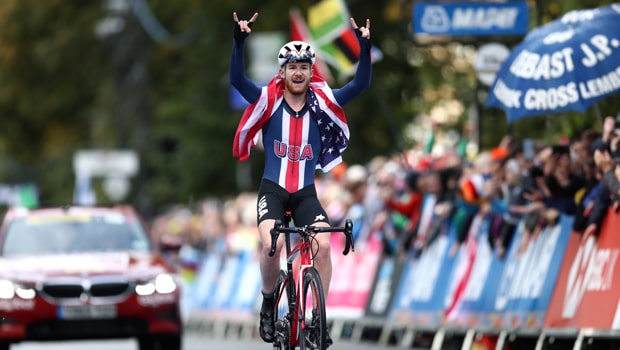 Quinn Simmons has become the first American to win the Junior Men’s category of the World Road Race since 1991 after finishing first at the Yorkshire 2019 World Championships race on Thursday in Harrogate.

18-year-old Simmons was in a pack of five riders who rode into the ending circuit in a highly interesting race, he then overtook Brit Lewis Askey and then attacked with just about 33km from the finishing line.

On what was a highly entertaining race, Simmons made the decisive move when he attacked British rider Lewis Askey just beneath the brow of a steep climb, 33km out from the finishing line here in Harrogate.

The final moments of the race was not all rosy for Simmons who eventually rode solo to the finish line as a good number of riders stage an attempt to overtake him, but he managed to hold them off to win gold by one minutes and thirty-three seconds (1:30secs)

Sheffield’s bronze medal was not without a good form of competition, riding in support to Simmons before he was involved in a big battle which included four other riders for the last medal.