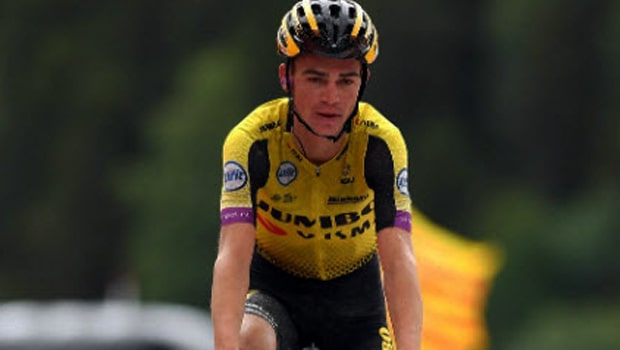 Jumbo-Visma American rider Sepp Kuss has emerged winner of the 15th stage of the Spanish Vuelta on Sunday. The 24-year old managed to steer out and clear of a group of riders who jostled to take the win in an intriguing 2hours race across the mountainous tracks.

Sepp Kuss’ Jumbo-Visma Captain Primoz Roglic on his part managed to beat off 2009 Vuelta winner and Champion, Alejandro Valverde and maintaining an overall lead in the race after he had claimed the red jersey at Stage 10 of the race.

The Slovak, Roglic looks like he has the Championship to Lose with just one week left in Madrid leading the overall standing ahead of the overall leaders with a record of 58hrs 10mins 32 secs while Alejandro Valverde of Movistar gets the 2nd place and loss behind with +2mins 25secs while Roglic compatriots Tadej Pogacar sits third with +3mins 42secs further behind.

The 154.4 Kilometer (96mile) strenuous race showcases how Kuss successfully step out a small breakaway group which had elite number of cyclists to lead and finish the race at the of Santuario del Acebo in 4 hours, 19 minutes, high-fiving the crowd by the barriers on the roadside as he rode to victory.

“It’s pretty big, I guess. Honestly, it hasn’t quite sunk in. It is an incredible day., “I think that is what makes the Vuelta so special, the passion of the fans. “I have good days when you feel their enthusiasm, but on the bad days when you’re 30 minutes behind the winner, they are there to cheer you and give you a push, that is what makes cycling special.” Kuss, who was the winner of the Tour of Utah last year

On Monday the 16th stage of the Spanish Vuelta takes place in green northern mountains, with more than 144 kilometers (89 miles) from Pravia to summit finish at the Alto de la Cubilla while the three-week race will come to a finish in Madrid on 15th of September and if Roglic maintains his lead till then, it will be the Slovak’s first-ever victory in his cycling career.