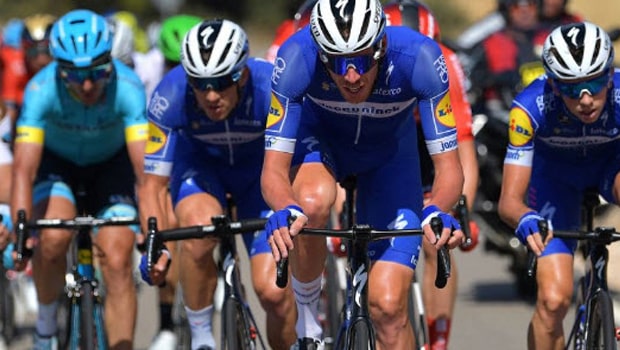 Belgian rider Philippe Gilbert has emerged the winner of stage 17 at the Vuelta a España. Movistar’s Nairo Quintana, on the other hand, tightened the competition on the overall standings after the wind assisted race on Wednesday.

Gilbert edged out Sam Bennett in the 219.6km long race while race leader Primož Roglič failed to strengthen his grip on the top of the standings.

The 37-year-old Belgian professional road bicycle racer, who rides for the UCI WorldTeam Deceuninck–Quick-Step, is renowned for winning the World Road Race Championships back in 2012.

Gilbert is also one of two riders, alongside Davide Rebellin, to have won the three Ardennes classics, which include the Amstel Gold Race, La Flèche Wallonne and Liège–Bastogne–Liège – in one single season. He accomplished that staggering feat in 2011, and also finished the season that year as the overall winner of the UCI World Tour.

2016 Vuelta winner Movistar’s Nairo Quintana has now spiced things up in the final stages of the Vuelta a España after moving into the second place of the general classification after the dramatic.  Nairo Quintana, also known as ‘The Lion’, is a top Colombian racing cyclist who rides for UCI WorldTeam Movistar Team.

The Stage 17 of the race saw a big breakaway which included forty riders. Quintana manages to move into the front group and held on to win the race to gain Five minutes and Nineteen Seconds to climb the overall standing into second.

Quintana, who has had a difficult second week suffering from cold which affected his performance, has now managed to become Roglič’s biggest threat.

“The idea was to weaken the leader and to get ahead. We’re in the fight for el maillot Rojo now. “It’s true, I’ve been in a bad way health-wise, I suffered a lot, but I’m still there. When your legs get tired, you pedal with your heart.” Quintana claims moments after his victory in Guadalajara.

Vuelta a Espana will resume with a 177.5km stage on Thursday. Quintana Nairo is backed at 14.75 to win the Vuelta a España