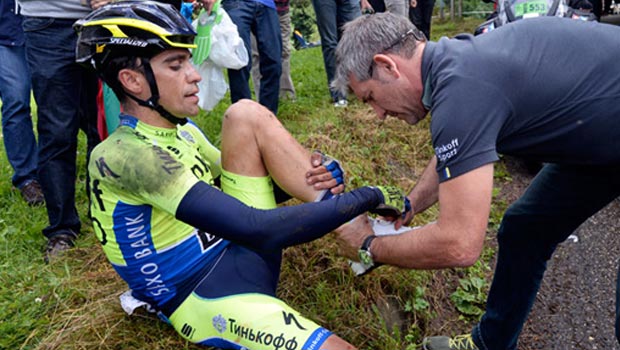 Spain’s Alberto Contador has become the latest big name to pull out of the ongoing Tour de France after he suffered a broken leg.

The Tinkoff-Saxo rider joins Team Sky’s Chris Froome in failing to stay in contention following a crash during the 161.5-kilometre 10th stage from Mulhouse to La Planche des Belles Filles.

The 31-year-old, who won the Tour de France in 2007 and 2009, tried to rejoin the peloton after coming off his bike but the 2014 edition of cycling’s biggest race has ultimately ended in failure for the ‘El Pistolero’.

Last week defending champion Chris Froome saw his bid to retain his crown come to a shuddering halt during stage five having suffered a fall on the stage to compound two crashes the previous day.

Froome later confirmed he had suffered fractures to his left wrist and also his right hand which meant he was unable to control his machine.

With Contador out of the race following his tumble on the approach to the third of six categorised climbs, Astana’s Vincenzo Nibali went on to win stage 10 to reclaim the yellow jersey.

Sports director for Contador’s Tinkoff-Saxo team, Philippe Mauduit, said: “Before pulling out, he told us he was in awful pain and he couldn’t go any further on his bike.

“Everything had gone well since the beginning of the Tour. In a fraction of a second, it all fell apart, so we’re immensely sad.”

Nibali is now 1.22 to go on and win the General Classification, with The Field 4.33.