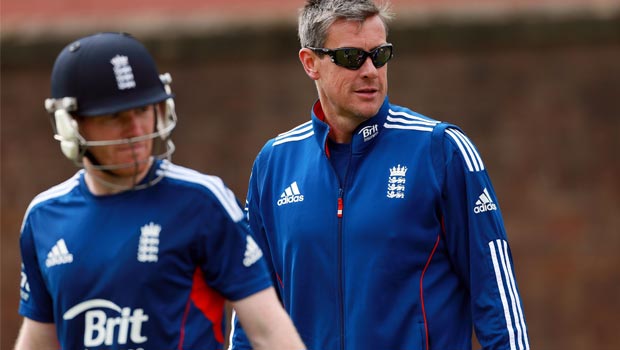 Ashley Giles is one of the favourites to be installed as a full-time successor to Andy Flower as England’s head coach and he insists that he is more than capable of making the tough decisions to help re-establish the side as a force.

Giles currently holds the reins for the limited-overs sides but recent performances have not exactly won over the doubters, with an early exit from the ICC World Twenty20 also doing little to help his cause.

Defeat to New Zealand in the opening game on the Duckworth and Lewis method could be considered unfortunate but the Three Lions only remained in the hunt for a semi-final place thanks to a sensational unbeaten century from Alex Hales after a shambolic display in the field against Sri Lanka.

However, hopes of progressing were extinguished on Saturday as South Africa secured a three-run win, which was not in truth as close as it sounds.

England now take on the Netherlands in a dead rubber on Monday with perhaps attentions already turning to the future, with some critics suggesting Giles is too nice to be installed as the head coach.

Giles though insists that he is not afraid of making the big decisions as he has already shown that when guiding Warwickshire to the County Championship in 2012.

“I led Warwickshire for five years and had to make some tough decisions and made them,” Giles told BBC Sport.

“There’s been a lot said about my style of coaching, whether I’m tough enough and can make those strong decisions.

“If I don’t make those tough calls, people above me will make those judgements on me.”

It will be interesting to see whether Giles makes some big decisions on Monday with one or two of the bowlers coming under fire for their performances so far, in particular Jade Dernbach who conceded 44 runs in three overs to help the Proteas score 196-7.