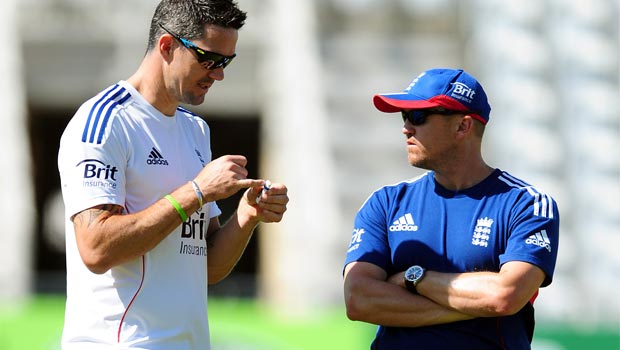 Flower denied reports on Wednesday morning that he had issued a ‘him or me’ ultimatum to the England and Wales Cricket Board (ECB) over the South African-born cricketer, who has been in the headlines constantly since making his Test match debut in 2005.

But Vaughan says that board members and Pietersen should “bang their heads together” to ensure that England’s star batsman remains in the setup.

In an interview with BBC Radio 5 live, Vaughan said: “There’s clearly an issue between Kevin Pietersen and the team.

“Andy Flower has seen all the headlines. He might not have said exactly what is reported, but there is clearly an issue between him and Kevin Pietersen.”

Vaughan has watched in disbelief as the 33-year-old has stood fielding on the boundary during the recent Test series in Australia, which England lost 5-0.

“He is never involved in any of the team discussions,” he added.

Flower, England’s team director since 2009, has overseen three Ashes series wins in four years but has found his own position called into questuon after the recent debacle Down Under.

The 45-year-old former Zimbabwean international has committed his future to English cricket and stated that Alastair Cook should continue as captain, while Pietersen stated too he has no intention of quitting Test cricket.

Now Vaughan, who captained Pietersen during England’s 2005 Ashes win, is calling on the ECB to demand the pair hold a clear-the-air meeting.

He added: “Give it a week or so and take a little bit of time to breathe, then have a mature meeting.

“Let’s get them both together and try and get English cricket moving forward because it will be a great shame if Kevin Pietersen never represents England again.