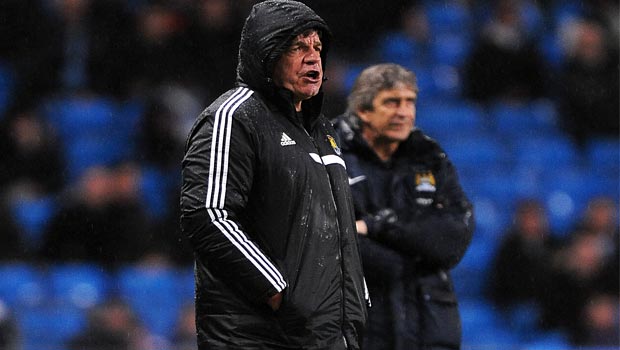 West Ham boss Sam Allardyce has no plans to walk away from Upton Park following his side’s 6-0 Capital One Cup thrashing at Manchester City.

The Hammers conceded three goals in each half in the first-leg at the Etihad Stadium on Wednesday as Alvaro Negredo hit a hat trick, while Edin Dzeko scored a brace and Yaya Toure found the back of the net.

The defeat came just days after West Ham were humbled 5-0 by Championship outfit Nottingham Forest in the FA Cup and the travelling fans voiced their displeasure at the final whistle at City, with much of the abuse aimed at the manager.

Allardyce, however, insists he can cope with the pressure and has vowed to stay on at West Ham boss.

“It is my job first thing in the morning to get the players up. We have got to get our heads up, shoulders back and chests out and try to bounce back, starting with Cardiff City at the weekend.”

The Hammers are 19th in the Premier League table ahead of Saturday’s trip to Cardiff, who are 17th and three points better off than Allardyce’s side.

West Ham have managed to pick up just two points from their last seven league games but a win at the Cardiff City Stadium could potentially move them out of the bottom three depending on results elsewhere.

West Ham’s co-owners have recently spoken out in support of the manager, who was under pressure prior to the defeat at City, and highlighted the club’s lengthy injury list as a major factor in their recent struggles.

Allardyce is confident results will improve when he has his key men fit and available, with summer signing Andy Carroll yet to make an appearance this season due to injury.

He added: “Defence is where I have the most problems. When our defence was together, we had eight clean sheets in our first 11 or 12 games.
We have lost James Tomkins, James Collins and Winston Reid. We also haven’t had our biggest investment, Andy Carroll, who we thought was going to get the goals for us.

“If I could have done anything differently tonight, I would have played with Reid, Collins, Carroll and Kevin Nolan but we didn’t have them available.”