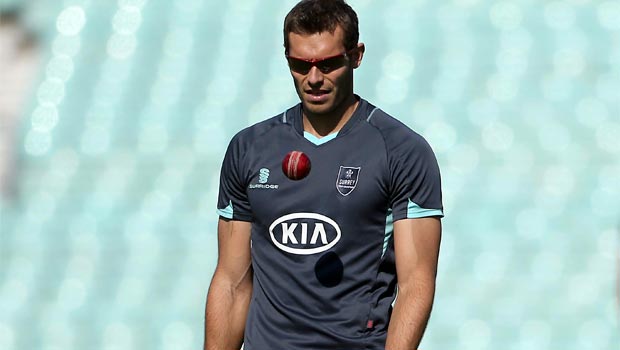 England bowling coach David Saker has dropped a clear hint that pace bowler Chris Tremlett will be in the side for the first Ashes Test against Australia on Thursday.

Andy Flower’s side are moving from Sydney to Brisbane on Sunday to begin their final preparations for the start of the Ashes series, which gets under way at The Gabba next week.

And, as they start to formulate their plans on who will be in the starting XI, Australian-born coach, Saker, spoke highly of Tremlett’s improving form on the tour and it seems certain that he will get the nod ahead of Steven Finn and Boyd Rankin to take the injured Tim Bresnan’s spot.

“I think we’re pretty clear in our minds where we’re going to go. I’m not going to announce who’s going to play but we’re confident where we are,” Saker said.

“(Bowlers haven’t gone as well as we’d like) But I know that the guys we’ve got in this group are good enough and we’re prepared and we’re ready for this challenge.

“In the last week I’ve seen a big change for Chris Tremlett, so that was a real pleasing thing for us.

“We did have two or three really good sessions in Sydney. We had a good chat about some certain things.

“The nets were fantastic batting surfaces and he came out of that really well and I think he gained a lot of confidence in where he was.”

On wicketkeeper, Prior, who completed a batting session in Sydney on Saturday as he builds up his fitness following a calf injury suffered during the tour match in Hobart, Saker added: “He’s making good progress up to now. Obviously we’d love him on the park on Thursday.

“He’s got a few days to get that right. I’m confident he’ll be right but that’s for the medical department.”