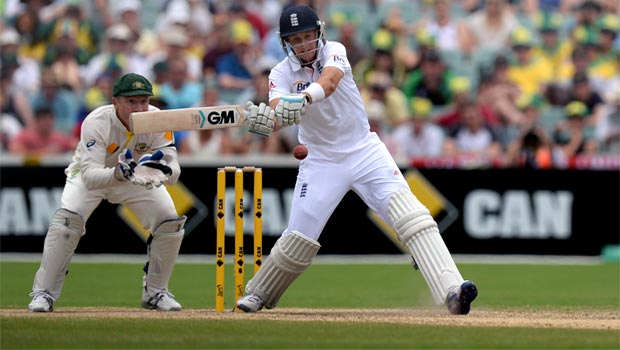 Joe Root believes England’s fighting spirit on the fourth day of the second Test in Adelaide proves they have the resources to come back and retain the Ashes.

On another eventful day in South Australia, Baggy Green skipper Michael Clarke caused something of a surprise by declaring before the start of play, leaving the tourists needing 531 to win the match and level the series.

Their reply could hardly have started worse with both Alastair Cook and Michael Carberry failing to establish themselves but Root came in and demonstrated why he is being touted as the next great English batsman, scoring a stylish 87.

His third-wicket stand of 111 with Kevin Pietersen gave the England innings some much needed stability but they couldn’t hold on, slipping to 247-6 by the close of play, and now Andy Flower’s men go into Monday staring another defeat square in the face.

Stuart Broad and Matt Prior are currently the men at the crease and it appears as if those two will need to have career defining days, or for it to rain, if the tourists are to escape with a draw.

Trailing 2-0 in the series heading to the third Test in Perth would hardly be described as ideal for the current holders but Root believes the resilience they showed on the fourth day can spur them on to not just a result in Adelaide, but also help them retain the urn.

“We always want to show fight, we pride ourselves on that and obviously so far in this series we’ve not managed to do that so it’s good to have a few guys getting some scores and showing a bit of fight,” he told Sky Sports.

“As a team we know we’ve been underperforming – that’s quite evident with the scores we’ve got – and we’re just going to have to make sure we keep fronting up and that we keep trying to challenge ourselves in practice and when we get out there make sure we get in a scrap and do our country proud.”