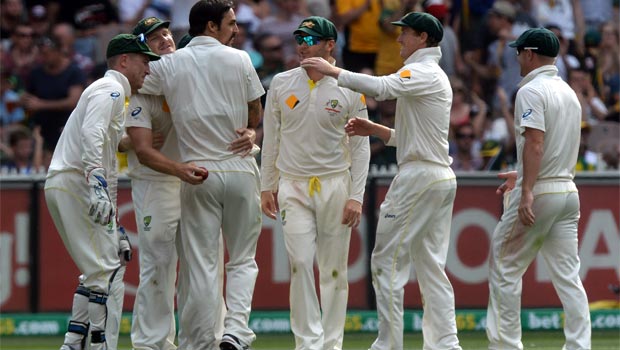 England began the post-Graeme Swann era in what is becoming an all too familiar fashion as Australia stifled the touring batsmen before a late triple strike helped the Baggy Greens enjoy the better of the opening day of the fourth Test.

In front of what turned out to be a new world record crowd of 91,092 for a Test match, Michael Clarke won his fourth toss of the series – surprising himself as well as the crowd as he opted to put the Three Lions into bat, possibly regretting that decision in the early stages.

Alastair Cook and Michael Carberry made a relatively positive start to the match, racing to 48 without loss in the first hour as the two openers tried to recover some pride for the team.

However, the England captain was caught at second slip for 27 by his Aussie counterpart after fishing at a wide one from Peter Siddle before Carberry and Joe Root fell quickly in succession after lunch.

Carberry (38) left a Shane Watson that just nipped back enough to clip off stump to waste his morning’s work before the Yorkshire youngster played at one too many and was caught behind off Ryan Harris for an 82-ball 24.

Ian Bell was another to get a start, albeit a slow one, before falling in similar fashion to Root for 27 – and the new ball did the rest as Mitchell Johnson finally found his rhythm.

He had Ben Stokes caught at slip for 14 by Watson – who had earlier picked up a groin strain while bowling before returning to the field – and then rearranged Johnny Bairstow’s stumps with a fast inswinger that proved too good for Matt Prior’s replacement.

Much now depends on Kevin Pietersen as he remains at the crease after an uncharacteristically dogged 67, coming off 152 balls – going 47 minutes in the afternoon session without scoring a run.

England’s number four has still enjoyed some good fortune despite his patience, having been dropped on seven and 41, but with him at the crease the Three Lions will still be hopeful that he can engineer a competitive total with the rest of the tail.

What that total will be remains to be seen but the pitch has offered no demons so far and the Australians will be the ones going into day two in more confident mood, particularly with the new ball still only
10 overs old.