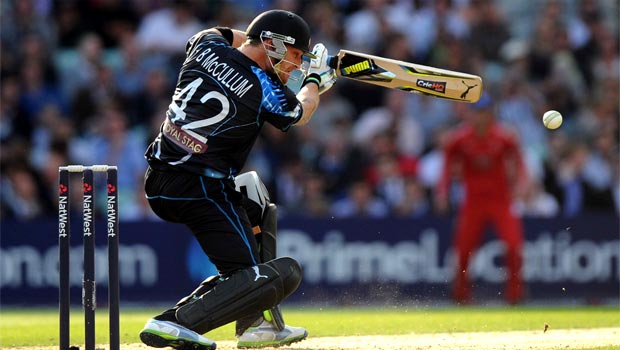 Brendon McCullum’s brilliant double century has put New Zealand firmly in control of the first Test with India in Auckland.

The hard-hitting skipper began day two on 143 and went on to reach 223 before he was last man out as the Kiwis made 503.

He was well supported by Corey Anderson, whose 77 came from just 109 deliveries and contained 13 fours and one six, while Tim Southee chipped in with a rapid 28 in support of his captain.

The Asians were beaten 4-0 in the recent one-day series and things did not get any better when it was their turn to bat, as they slipped to 10-3 in the face of some hostile bowling from Trent Boult.

The left-armer claimed the wickets of Shikhar Dhawan for a duck and Cheteshwar Pujara, who made just one, inside the opening over, before Virat Kohli edged to slip off Southee for just four to leave the Indians reeling.

Murali Vijay reached 26 before he was bowled by Neil Wagner and, at 51-4, the tourists were in real danger of failing to make the follow-on target.

But Rohit Sharma dug in and reached stumps unbeaten on 67, sharing an unbroken stand of 79 with Ajinkya Rahane (23no), with India still needing a further 174 runs to avoid the follow-on.

India have always been labelled as a side that does not travel well and it appears as though they are still inflicted with the same illness as, on paper at least, they look a much stronger unit than the Black Caps.

Led by the excellent McCullum however, New Zealand look on course for a famous victory over MS Dhoni’s men as the balance of power continues to shift in world cricket.