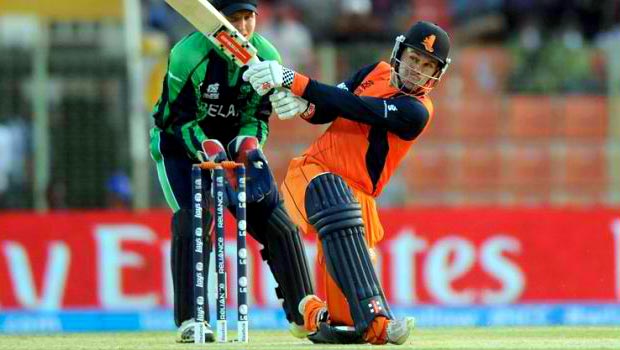 The Netherlands pulled off a famous six-wicket victory over Ireland in Sylhet to unexpectedly qualify for the Super 10 stage of the ICC World T20 tournament.

The Dutch broke a whole host of records as they successfully chased down Ireland’s total of 189 to achieve their best win since beating England five years ago.

Ireland batted first and set what looked like a formidable target thanks to a late blitz from Kevin O’Brien, who smashed 42 from just 16 deliveries, and solid contributions from opener William Porterfield (47 runs from 32 balls) and Andrew Poynter (57 from 38).

But the Netherlands set about their task in impressive fashion, putting on 91 for the first wicket before Peter Borren fell for 31, having scored at a rate of two runs per ball.

Fellow opener Stephan Myburgh was next to go but not before he had smashed the Irish attack for seven sixes and three fours in a total of 63 off just 23 deliveries.

After Logan van Beek fell cheaply, Ireland were unable to force another breakthrough until Tom Cooper’s cameo innings of 45 was brought to an end when he holed out at deep backward square.

That proved to be the final Dutch wicket to fall as Wesley Barresi (40 not out) and Ben Cooper (9 not out) saw the Netherlands home with six wickets and 37 balls to spare, Barresi getting them over the winning line in spectacular fashion with a six off the bowling of Tim Murtagh.

Netherlands run rate of 13.95 per over is the second best in the history of T20 international cricket.

Borren said: “I am not really sure if I have seen cleaner hitting. In 2009 we beat England and that was a pretty special night. But I told the boys that 2009 was five years ago and it was time to create a new memory.”