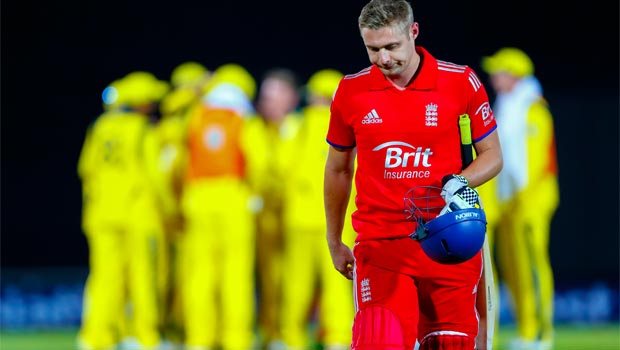 England’s cricketers will return home with nothing to celebrate after losing the final ODI to Australia in Adelaide.

Having been whitewashed in the Ashes, England saw the subsequent ODI series as a chance for redemption, but even that dream faded when they went three down, and with two matches left, a record 10-match run of defeats to their old rivals was a big possibility.

Thankfully for captain Alastair Cook, that scenario was avoided when England finally won in Perth on Friday, but there was to be final rally from the Aussie troops as the tourists went down to a five-run defeat in the fifth and final match.

A win still seemed possible when Australia were limited to 217 for 9 off their 50 overs, the hosts’ lowest score of the series thanks to some very guarded bowling from England, with Stuart Broad and Ben Stokes each claiming three wickets.

Joe Root knocked a half century, and after 25 overs England looked well in command, but from 154 for three, wickets started to tumble, with the last seven going for just a paltry 59 runs to leave the tourists down and out on 212, five runs short.

England can argue that it was a close call, and indeed there was some debate over the stumping of Ravi Bopara, with replays showing that his foot may well have been down as wicketkeeper Matthew Wade dropped the ball on the bails .

It was all academic in the end though, as fittingly for the hosts, they emerged 4-1 series winners on Australia Day.