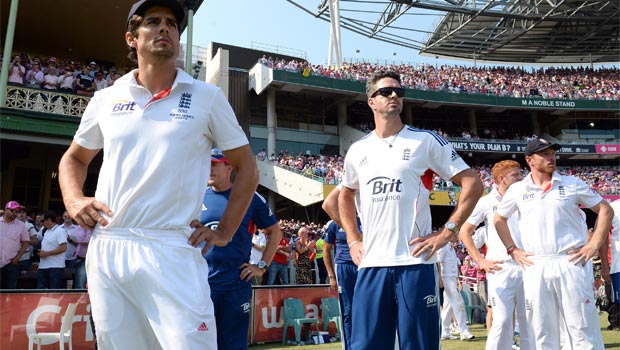 England’s cricketers suffered yet another defeat at the hands of Australia in Melbourne and have less than a week to turn things round.

Having suffered a humiliating 5-0 whitewash in the Ashes, it was hoped that the ODI series would offer the tourists some, if little compensation.

However, the hosts made certain that would not happen in the immediate future at least as they inflicted a six-wicket defeat on Alastair Cook’s side, with Aaron Finch grabbing a century during a 163-run opening partnership with David Warner.

It was all too easy for Australia as they chased a target of 269, with England’s fielders playing as if they had smeared butter on their hands. Cook himself hardly set an example in England’s innings, lasting until just the third ball when caught by Brad Haddin off Clint McKay for four.

Wickets continued to tumble until Jos Buttler and Tim Bresnan steadied the ship all too late in the day, and really, once Finch and Warner got their eye in, the outcome was a formality.

Speaking afterwards on Sky Sports, Cook stated the obvious: “Hundreds win you games in one-day cricket and the last few games we haven’t done that.

“We were a little bit slow to start off with. They bowled pretty well, give them credit for that, then we had the partnership between Gary (Ballance) and Eoin (Morgan). But you’ve got to turn in big partnerships.

“You’ve got to get yourself in before you can do anything. The way Aaron and David Warner played, straight away they got themselves in, built a partnership and then accelerated along the way.

“In our innings, we kept building partnerships of 20 or 30 runs but then got out again, and you need to get double that to get a big score.”

Cook went on to single out the lack of firepower in the bowling department.

“A score of 270 would probably have been defendable if we’d bowled as well as we could have done,” he said.

“But we’ve a very inexperienced bowling attack, it was the first time in a big stadium for a lot of them, so you do have to give them a bit of leeway.

“Still, we can turn this around. It’s one-day cricket, you need people to come off on their day and we’ve got a lot of talent and a lot of firepower in that line-up to do that.”

Cook has just five days to come up with a solution, or Brisbane on Friday will witness a seventh straight victory by Australia against the old enemy and, from a betting perspective, it’s hard not to side with the hosts.