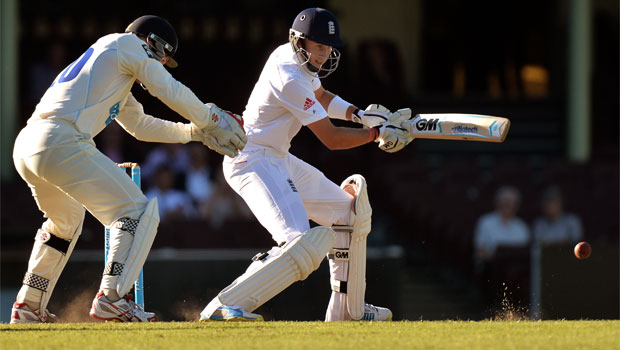 England appear to be warming up nicely for the start of the Ashes next week after they impressed with the bat on day two of their final warm-up game against an Australian Invitational XI.

After being thwarted by rain somewhat since arriving Down Under, England’s key batsmen finally got some valuable time at the crease on the second day against the Invitational side in Sydney.

And they generally looked in good shape as skipper Alastair Cook struck 81, Jonathan Trott claimed 83 and Kevin Pietersen weighed in with 57 – the trio’s half-centuries leaving the tourists on 302-5 in reply to the hosts’ 304 all out.

Ian Bell also did well early on before being dismissed by newcomer James Muirhead for 35, while the only real disappointment on a good day’s work was Michael Carberry’s efforts, as he went cheaply at the SCG to damage his chances of a start in the first Test in Brisbane, which begins next Thursday.

Carberry, who had struck 153 in the previous tour match against Australia A to enhance his claims, managed just four runs before being caught behind and he will hope to get another chance in the second innings – if the weather holds for the final two days of this four-day game.

Earlier Steven Finn (5-103) took three quick wickets to help dismiss the home side, while Stuart Broad again looked in fine fettle as he ended the innings with figures of 4-37, including taking out Ryan Carters – who was six runs short of his maiden first-class century – with the first ball of the day.

Boyd Rankin also took a wicket as England finally appeared to get into their rhythm on what has been a disjointed build-up to the Ashes in Australia so far.
They will hope to now go on and win this final warm-up match but more rain is predicted to affect the final two days’ play at the SCG.