India – Cricket: Dhoni one match away from elusive title 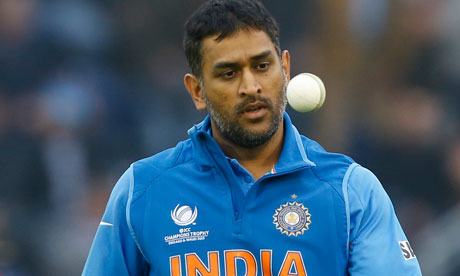 India cricket captain MS Dhoni has full trophy cabinet having won pretty much everything, but would like to make room for another Champions Trophy.

The Indian selectors have proved the critics wrong in no uncertain terms during the tournament, as a squad devoid of some star names has marched ruthlessly to Sunday’s ICC Champions Trophy Final and a meeting with hosts England at Edgbaston.

The squad for the final is almost certain to remain unchanged, as Dhoni believes in sticking with the ?tested? eleven. Therefore, barring injuries, India would be fielding the same line up for the final.

They take on an England side looking to capture their first big ODI title, and will line up evenly matched, although England have the advantage in terms of experience, particularly in the conditions.

Granted Shikar Dhawan has been a revelation at the crease, but now has to face the variation and swing that James Anderson can offer, while there is a chance that Kumar will be knocked all over the pitch if Alastair Cook gets his eye in.

And of course there is the prospect of Steve Finn launching a few short ones at Suresh Raina in particular, so India already know the task that lies ahead of them on Sunday.

If past big matches at Edgbaston are anything to go by, it could be a good day to pin hopes on the seamers, and that is bad news for Dhoni, who may just have to put the silver polish back in the cupboard and missing out on the title with this event set to be the last ever ICC Champions trophy .

India did actually share the trophy in 2002 with hosts Sri Lanka after the final was washed out twice, but Dhoni was not part of the set-up back then.