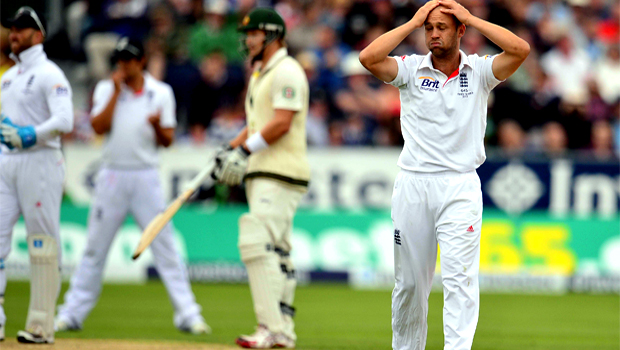 Batsman Jonathan Trott has revealed the England team have been left feeling frustrated after a middle-order collapse on day one of the fourth Ashes Test.

The hosts won the toss at Chester-le-Street in Durham and elected to bat, Alastair Cook along with the Warwickshire man led an effort which reached a positive 147-2.

A partnership of 73 was finally brought to an end by Nathan Lyon when Trott was caught at short leg off inside edge and pad.

Ian Bell’s dismissal for just six signalled the start of the end for Andy Flower’s side as Jonny Bairstow, Stuart Broad and Graeme Swann were all guilty of giving their wickets away.

James Anderson and Tim Bresnan ended the day at the crease with England on 238-9, as they look to try and add further runs to the disappointing tally.

Lyon caused problems with his testing line and length to finish with impressive figures of 4-42, with the rest of the wickets shared between the quartet of seamers.

Trott admitted that the balance of power had swayed in Australia’s favour and once again a poor display with the bat has piled the pressure on the bowlers.

The southern hemisphere side are looking to try and mount a recovery after falling to consecutive defeats in the opening two Tests, before drawing in a rain interrupted third Test at Old Trafford.

Trott said: “I felt pretty good to get to 49 and then got out, but that’s the nature of this game. As soon as you feel you are doing well it takes something away from you.

“Winning the toss and being a 100 odd for one it’s disappointing to then go and lose some soft wickets.

“We have to reassess that and put it right. Generally guys know what they have done wrong. I certainly know personally. It’s up to individuals to put it right.”