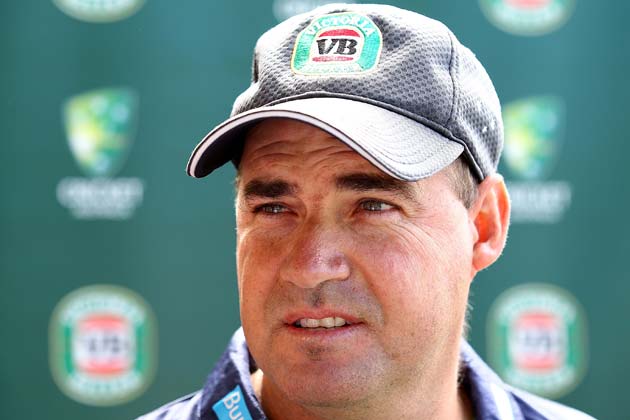 Australia coach Micky Arthur says there is no margin for error as his side chase the win they need against Sri Lanka.

Australia coach Micky Arthur says there is no margin for error as his side chase the win they need against Sri Lanka to progress through to the Champions Trophy semi-finals.

The Baggy Greens have yet to win in the competition so far, losing to England by 48 runs last weekend before a rain-soaked no result with New Zealand at Edgbaston on Wednesday.

They take on a Sri Lanka side in buoyant mood following their impressive seven-wicket win over England at the Oval on Thursday, a performance that featured an imperious 134 not out from Kumar Sangakkara and a 30-ball half century from Nuwan Kulasekara.

It was a result that leaves Group A wide open, though Australia know they have to win at the Oval on Monday to stand any chance of progressing.

It has been an equally difficult tournament for Australia off the pitch, with captain Michael Clarke yet to play due to a persistent back injury and David Warner being fined and suspended for a late night incident in a Birmingham bar.

While he will be no doubt be pleased to be talking about matters on the pitch, Arthur is under no illusions as to the task facing his side and says every member of his team needs to be on form if they are to progress.

“You talk about the big three in the batting – [Tillakaratne] Dilshan, [Mahela] Jayawardene, Sangakkara – you talk about [Lasith] Malinga with the ball, but Sri Lanka have built up a really nice unit,” he said.

“We know we’ve got to be really on our money. We know we can’t obviously take anybody lightly, we’ve got to again prepare the best we can and come out and put in the performance that hopefully takes us to a semi-final.”