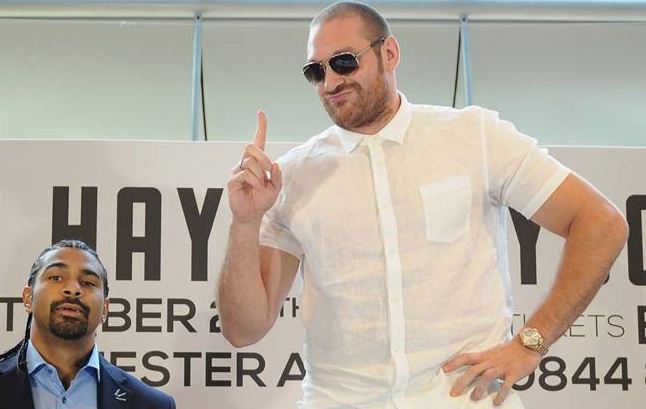 Tyson Fury’s trainer believes the undefeated heavyweight will come out on top of the huge all-British clash with David Haye on September 28.

Peter Fury was absent from the 24-year-old’s last bout against Steve Cunningham after he failed to secure a visa in time for the fight in New York.

Fury was heavily criticised for his showing against the American, Cunningham putting his opponent down before the Brit picked himself up to stop him in the seventh on his Stateside debut.

Fury’s trainer insists anyone expecting a repeat performance of the Cunningham fight when his man faces Haye will be sorely disappointed, and claims Fury would have won his most recent bout comfortably had he been present.

Peter Fury is frustrated at the number of people who are predicting former heavyweight champion Haye will stroll to victory at the Manchester Arena and has warned them his fighter will produce the performance of his career to shock the 32-year-old.

“They’re all going on from the Cunningham fight, but like I said, I wasn’t there. It’s almost like Lewis Hamilton driving around a race track with nobody in the cockpit. It’s as serious as that,” he told the Ringside Toe-2-Toe podcast.

“I’m going to be in the corner, giving his instructions and expect to see a solid, world class Tyson Fury. Better than the previous fights.

Fury has won all 21 of his professional bouts so far but his trainer admits the showdown with Haye is his biggest test to date, praising the pedigree of his opponent, who has lost two of his 26 fights.

“He’s got the speed, he gives angles, he’s an accomplished fighter.

He’s only lost to two world champions of very high calibre, so this is a very good fight for Tyson,” he added.