Posted by Vincent Henderson on November 27, 2013 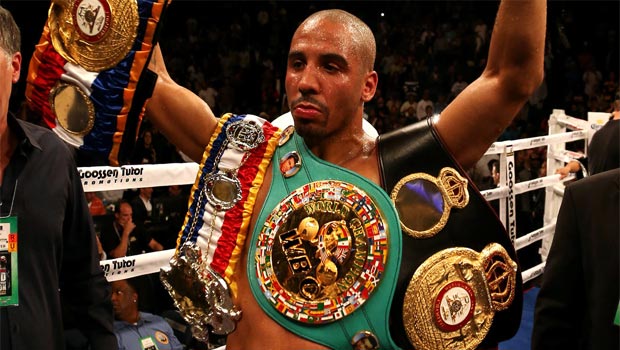 WBA champion Andre Ward is ready for a super-middleweight unification title showdown against WBA and IBF belt holder Carl Froch and would be happy to fight in the UK.

The 29-year-old American has already defeated Froch on a unanimous points decision in their first meeting in Atlantic City almost two years ago and there has been talk of a rematch ever since.

However, Froch was side-tracked by preparing for his bout against mandatory challenger and fellow Briton George Groves in Manchester on Saturday, while Ward secured a unanimous points decision over Edwin Rodriguez in a non-title fight the week before.

With both men coming through unscathed, Ward insists he will be open to a fight against Froch, although he admitted to being wary of fighting the Nottingham boxer in front of his home fans following his controversial ninth-round stoppage of Groves at the weekend.

The unbeaten Ward told BBC Radio 5 Live: “I’m not concerned about fighting in front of his fans, but it is about not getting a fair shake. I’ve realistic concerns.

“Like I said, it’s my legacy at stake if he didn’t beat me, but if something happens like in the Groves fight then that is tough to live down. It’s a lot of moving pieces.”

But he added: “I know that my promoter [Dan Goossen] has contacted his promoter to see what interest there is,” added Ward.
“The initial conversation took place after Froch’s rematch with Mikkel Kessler [in May], but I was still injured and we couldn’t move forward then the way we wanted to.

“I don’t know all the detail, but I’ve been in the game long enough to know if both sides want a fight to be made, the fight will be made.”

A fight between the pair will now depend on if Froch decides to grant Groves a rematch first after he felt referee Howard Foster prematurely ended their fight at the weekend while he was ahead on all three of the judges’ scorecards.