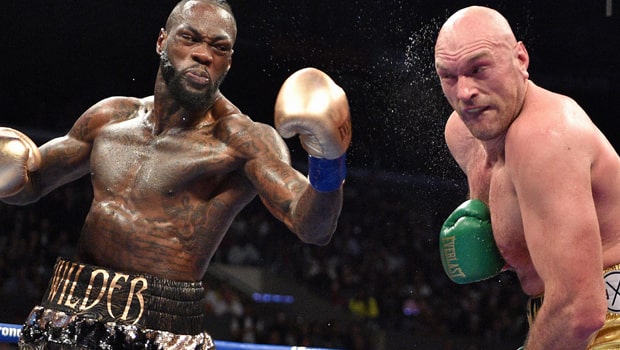 Tyson Fury says his highly-anticipated rematch with Deontay Wilder is likely to take place in 2020 after he emphatically stopped Tom Schwarz in Las Vegas on Saturday night.

The ‘Gypsy King’ was fighting for the first time since his explosive draw with Wilder in December and he produced a vintage display against the previously unbeaten Schwarz, sending the German to the canvas in the second round before the referee called the fight moments later.

The former world heavyweight champion was certainly pleased by his performance at the MGM Grand and he believes he is back in top condition after having almost three years out of the sport prior to his return in 2018.

“Thank you America and God bless you all!” Fury told ESPN and BT Sport Box Office after beating Schwarz.

“The key tonight was to enjoy myself, using the jab, I was slipping and sliding in there with my hands down. I switched to southpaw and caught him with a straight left that would’ve put anyone away.

“I put on an extra 12lbs and I really feel it, I haven’t had three years out of the ring this time, just a few months. I’m back, the lineal champion, bring them all on!”

Fury also confirmed he intends to return to the ring in the autumn before he fully turns his attention to a potential rematch with Wilder, who was also at his explosive best when knocking out Dominic Breazeale in the first round of their heavyweight contest last month.

“We have got September 21 or October 5 for my next fight and then, next year, we will hunt down Deontay Wilder and make him give me that green belt,” Fury added.