Tyson Fury: I can outbox Anthony Joshua and Deontay Wilder 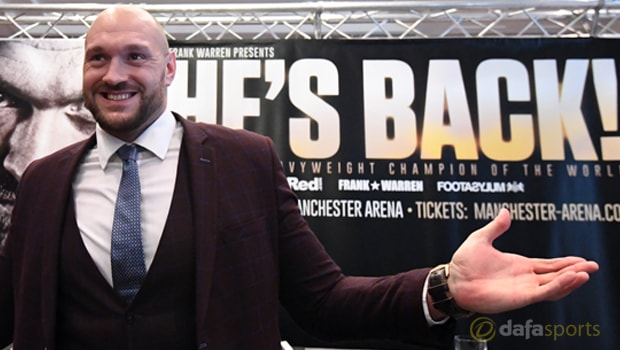 Tyson Fury says Anthony Joshua and Deontay Wilder are dangerous opponents but the former heavyweight champion is confident he can get the better of both fighters after announcing his return.

Fury has been away from boxing for over two and a half years due to numerous out-of-ring incidents which resulted in him stripped of his IBO, IBF, WBA and WBO heavyweight titles.

It was unclear whether the Briton, who defeated Wladimir Klitschko in his last fight back in 2015, would ever return to the ring after personal matters also weighed heavily on his shoulders during his time away from the ring.

However, on Thursday, it was confirmed the 29-year-old would make his comeback against an unnamed opponent in Manchester on June 9 and, victory this summer could set up a potential clash against 46-year-old American Shannon Briggs before the end of the year.

Fury is already lining up potential bouts with Joshua and Wilder, the top-two heavyweights in the division, and the ‘Gypsy King’ believes he has the ability and skills to defeat the pair.

“They are both very good opponents, both unbeaten, and both knockout punchers,” he was quoted as saying by Sky Sports.

“I believe I can outbox both of them, but they are both very dangerous all the time they are in the ring.

“I believe I needed that. I believe it was a must and I couldn’t take any more boxing at the time. Now I have the hunger back and I’m back to the beginning. It’s like I’m turning pro again, professional debut.

“All the boys – AJ, Wilder, Parker, Baby Miller, Dominic Breazeale, all the good guys in the division, Dillian Whyte, everybody else – you’re all on notice. ‘The Mack’ is back and more ferocious than ever.”