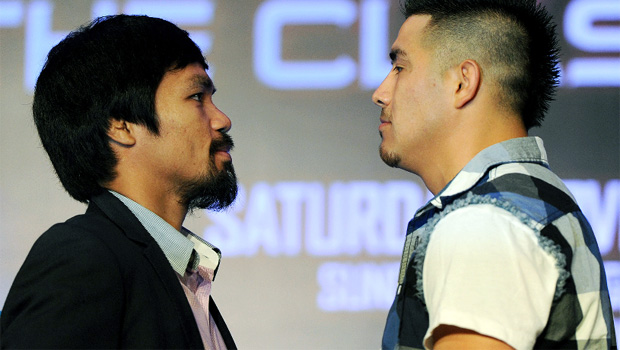 Brandon Rios says he wants to be the fighter to retire Manny Pacquiao and claims he will show the Pac Man is a shadow of his former self when they meet on November 23.

The 27-year-old American is currently gearing up for the biggest fight of his career after agreeing to take on Pacquiao in Manila.

The Texas native comes into this contest off the back of his first professional defeat after losing a unanimous decision to Mike Alvarado in March.

Despite his record now reading 31-1, Rios is full of confidence he can bounce back to form against Pacquiao later this year.

The fight could be the Philippine fighter’s last as he looks to move into politics and he enters the contest having lost his last two bouts.

The 34-year-old lost a controversial split decision to Timothy Bradley last September before he was knocked out by Juan Manuel Marquez in December.

Pacquiao hasn’t fought since Marquez downed him and Rios feels the one-time P4P  king of professional boxing is starting to show his age.

“He had a great run, he lasted,” Rios told On the Ropes Boxing Radio.

“But there comes a point in your age when you are not the same no more.”

Rios has now outlined his plan for taking down Pacquiao, claiming he will employ similar tactics to the ones used by Antonio Margarito when the two squared off in 2011.

“He [Pacquiao] did not do so good against Margarito, and Antonio put pressure on, so that’s one thing I really want to do,” he added.

“I want to put pressure…we will see how he reacts to that…I want to go for body shots too…I want to say that I was the one to retire Manny Pacquiao.”