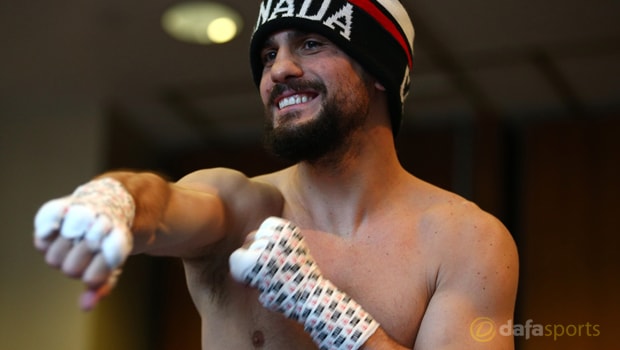 Phil Lo Greco believes all the pressure is on Amir Khan ahead of their bout in Liverpool on Saturday, while he has questioned the Brit’s mental state.

The Canadian heads into the fight at the Echo Arena as a massive underdog, despite having won his most recent trip to the ring against Mexican Jesus Gurrola.

Khan may be the favourite but he tasted defeat in dramatic circumstances in his last fight when Canelo Alvarez a brutal knockout blow in the sixth round.

That loss came almost two years ago and Khan has since dipped his toe into the celebrity lifestyle, most recently appearing on I’m a Celebrity Get Me Out of Here! Lo Greco believes Khan is still haunted by his knockout loss in May 2016 and feels the Bolton-born fighter is under huge pressure to prove otherwise.

“The knockout shot has been on his mind for a long time,” Lo Greco told Sky Sports News. “His lifestyle has not been the greatest.

He lives a lavish, luxury lifestyle and when you live the celebrity life it’s hard to dedicate yourself.

“He’s saying he’s having a better camp than Canelo but I don’t believe it.

Believe me, when I tell you, it’s hard for me to get up in the morning when I’m having fun – and I’m not a successful as he was.