Posted by Vincent Henderson on April 7, 2019 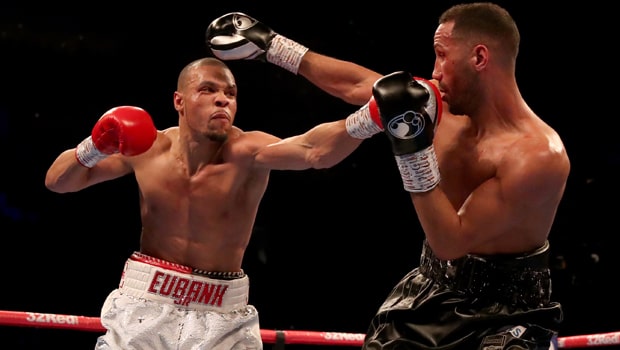 Trainer Nate Vasquez has urged Chris Eubank Jr to commit to a long-term trainer following his victory over James DeGale in February.

The duo teamed up to secure Eubank Jr’s biggest win yet, but the Brit is yet to confirm if Vasquez will remain in his corner.

Eubank Jr employed the American as the first full-time trainer of his career prior to his most recent fight, and he floored DeGale twice during his points win.

However, he and Vasquez have not spoken since and Eubank Jr has been training at Virgil Hunter’s gym in California.

Andre Ward and Amir Khan have both worked with Hunter in their careers but the trainer believes gym hopping will do Eubank Jr no good.

“I got the best win of his career with him. I’m not mad at him if he goes to another trainer.

“I don’t think Chris Jr will do a training camp in California without any of his people there. And I don’t think Virgil Hunter will leave California.

“Chris wants to be a boxer but he needs a lot of work on his footwork, and his style isn’t meant to be a boxer like Roy Jones Jr or Andre Ward. Some styles can’t change and, if he changed, it wouldn’t suit him.

“Chris is a pressure fighter and if you change him into a boxer it won’t go well for him.”

Eubank Jr could well step back down to middleweight in the future, where a fight against Saul Alvarez could be on the cards.

The Mexican is currently in training for his May 5 bout against Daniel Jacobs and Canelo is 1.36 to win, with Jacobs a 3.40 outsider.