Kell Brook: I will fight anyone 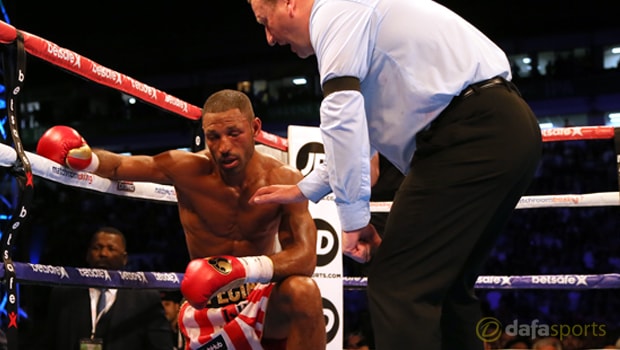 Kell Brook has opened up the possibility of a fight against fellow Brit Amir Khan after the Sheffield-born star revealed he is willing to “fight anyone” following Saturday’s defeat.

Brook put his IBF world welterweight title on the line in his home town against undefeated American Errol Spence Jr, who has been dubbed as the new Floyd Mayweather.

It was a tight contest between the pair but a badly swollen eye for the defending champion picked up midway through the bout proved to be a key moment in determining the winner.

Spence Jr ruthlessly went to work on that area of his opponent and, after putting his opponent down in the 10th, he wrapped up victory in the 11th round when the home favourite fell to his knees after being unable to see properly.

Brook was disappointed to have ended up on the wrong side of the result but he has vowed to take on any fighter put in front of him, sparking rumours of a grudge match with Khan.

“I will fight anyone, what the fans want, where the money is,” he was quoted as saying by BBC Sport.

“I’m sorry for everyone that come out. We made a great night for Sheffield and brought a lot of money into Sheffield. I hope everyone has had a good night.”

As for Spence Jr, he is now unbeaten in 22 fights, with 19 coming via stoppage, and all roads are now pointing towards becoming the dominant force at welterweight level.

“A true champion goes anywhere to fight,” he said: “The goal is to unify and become undisputed welterweight champion of the world.”