Posted by Vincent Henderson on December 15, 2017 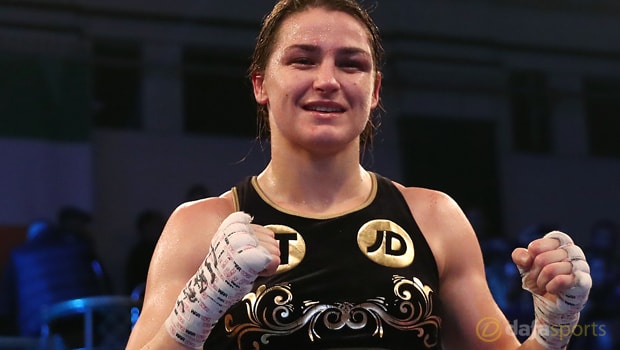 Promoter Eddie Hearn is targeting a world title unification bout in Dublin for Katie Taylor in the spring of 2018.

The Bray boxer came through the first defence of her WBA world lightweight title after a hard-fought battle with American Jessica McCaskill at York Hall in London on Wednesday.

The 2012 Olympic champion has yet to fight in Ireland since she turned pro, but Hearn is hopeful her next outing will take place in Dublin. Victoria Bustos of Argentina is the opponent Hearn wants to bring to Ireland.

The 28-year-old has held the IBF lightweight title since 2013 and has a record of 18 wins and four defeats since turning pro six years ago.

Hearn is keen to see Taylor enjoy some much-needed rest before her night contest. “I’d like to bring Katie to Dublin next.

“The popularity, we’ve seen it in England and in Wales, has been incredible. If we can bring a unification fight, we’d love to do it.

“April would work really well because it would give Katie the chance to have Christmas and January off which I think she needs.”

Bustos has so far fought exclusively in her homeland and while previous attempts to book a date with Taylor have failed, Hearn feels she may now be ready to travel.

“We have tried to fight her before. She hasn’t wanted to fight, but in the past few days they have shown signs that they want to take the fight next,” he added.