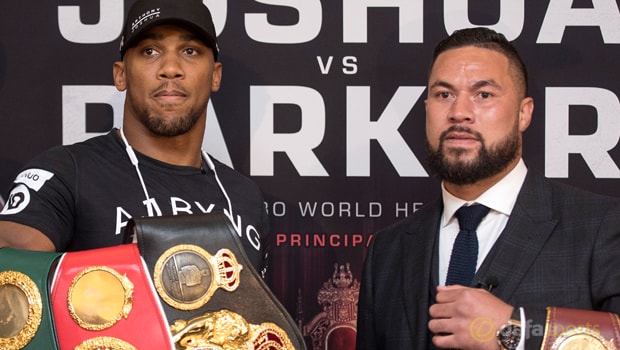 Joseph Parker’s trainer has told Anthony Joshua to forget about Deontay Wilder and focus on his upcoming fight.

The build up to AJ’s heavyweight unification fight with WBO Champion Parker has been dominated by talk and rumours of a fight with American Deontay Wilder, in a bout that has been mooted for some time.

A showdown with the Auckland born Parker was arranged in November with Joshua the overwhelming favourite to retain his IBF, WBA (Super), and IBO belts and take Parker’s WBC title.

Ahead of the clash on 31 March at the Principality Stadium in Cardiff, Parker’s trainer David Higgins has accused Joshua of disrespect, saying a win against the undefeated Parker is not a foregone conclusion.

“All this talk about Deontay Wilder, I think Anthony Joshua looks past Joseph Parker at his peril,” Higgins told Sky Sports.

“It’s one thing to quietly analyse future possibilities, but if they are going any further and are in the early stage of negotiations, it’s far too early for any of that.

“I don’t think Joseph Parker or Kevin Barry will be the slightest bit concerned that the Joshua camp are discussing all these other possibilities when they’ve got an unbeaten world champion in front of him, who has never been dropped in his life, and is lightning fast with his hands, and has great footwork.”

Wilder has continually called out Joshua in recent weeks, particularly as he beat Cuban veteran Luis Ortiz in a TKO decision in the 10th round, and now the Bronze Bomber will attempt to get a fight arranged with Joshua – if he overcomes Parker.