Posted by Vincent Henderson on February 12, 2014 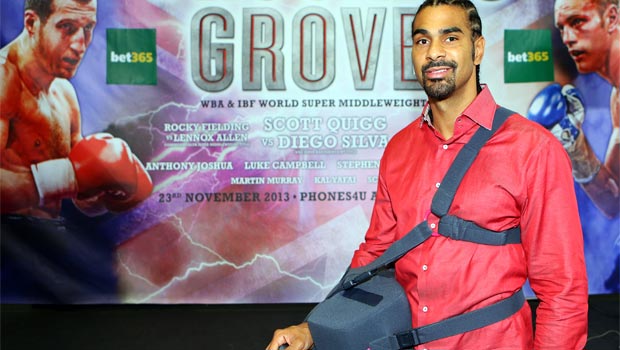 Heavyweight boxer David Haye has revealed he still doesn’t know if he will be allowed to return to the ring after career-threatening surgery.

The former world champion underwent a five-hour operation in Germany to repair ruptured tendons in his right arm in November.

Haye’s proposed fight with fellow BritonTyson Fury was cancelled due to the operation and at the time he insisted his career could be over.

The 33-year-old is determined to return and win more titles after losing his belt to Wladimir Klitschko in 2011, but he is still in limbo about a possible comeback.

He said: “You talk to 10 doctors, 50 per cent say you can make a recovery and 50 per cent say, ‘no you’re done, you’ll never be able to throw a punch again otherwise your arm will fall out of its socket’.

“At the moment I can’t throw a punch, so hopefully in a few months I’ll be able to throw one, but you never know.

“I can’t say 100 per cent yes or 100 per cent no, I’m just taking every day at a time. I won’t know anything for a good few months yet. My shoulder’s bad enough that I can’t even run yet.