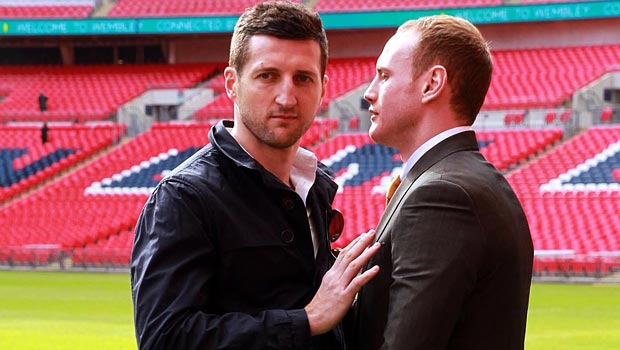 George Groves believes he has the advantage in his upcoming grudge clash against Carl Froch due to fighting so close to home.

The two super-middleweights will meet at Wembley Stadium on May 31 in one of the most hotly anticipated rematches of the modern era.

Groves was stopped in controversial circumstances in the first bout, with Froch picking up a stoppage victory in the ninth round. The Nottingham-based fighter was down in the first round after a chilling right hand from Groves, with the latter leaving the ring to a round of applause from the crowd in attendance.

The 26-year-old Londoner insists the crowd will be on his side for the fight, and believes Froch will be overawed by the atmosphere when the pair go toe-to-toe in front of 80,000 fans.

“I think in this fight it is going to be a massive, massive advantage for me,” Groves told Sky Sports.

“Carl Froch never really does too well away from home and he is very settled and comfortable in Nottingham.

“He is not doing many appearances lately, we haven’t heard much from him, he’s sort of trying to hide away. It’s very spiteful I think of his promoter Eddie Hearn to send him to London for this fight. He is already in a fight he knows he can’t win but he is also going to have to face a London crowd.

“Obviously there will be people travelling up and down the country to get here but there are plenty of Londoners that are excited to get down here and be part of this fight, to see the build-up.

“For the first time I think in Carl Froch’s career, on home soil he is going to be facing hostile fans, people who have paid money to come and see him lose.

“Come fight night he is going to struggle with that. He will have a core fan-base who will be supporting him but there will be a lot of people who will be there to see him get beat and we will see how he deals with that.”