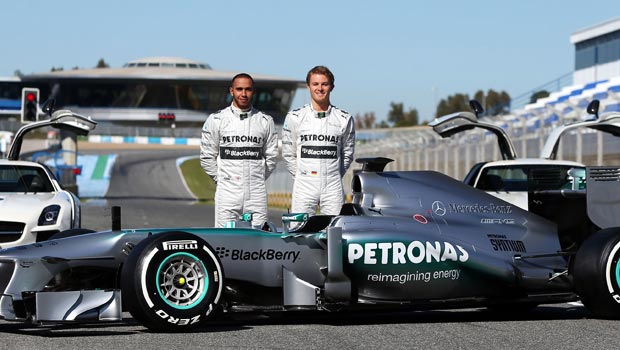 Mercedes’ Lewis Hamilton believes 2014 is the best chance for him to become world champion once again, but admits he needs to be wary of team-mate Nico Rosberg.

The duo have dominated the results so far this season, with Hamilton winning the last three races after retiring on the opening weekend in Melbourne.

His sublime start still sees him remain just behind Rosberg in World Drivers Championship standings, with the German consistently finishing in the top two so far in 2014.

Only four points separate the pair, and they both look likely to challenge for both titles on offer. No team in F1 has ever won the first four races and not seen a driver become world champion, and Hamilton is eager to not be the first.

Hamilton, 1.36 to win the World Drivers Championship, admits he is delighted with the team ethic at Mercedes, but is wary of the threat Rosberg possesses.

He said: “At this point it is evident I’ve never been in a car that’s ahead of the pack like it is, and I’ve never had a team that’s so together and so united.

“When I was at McLaren I don’t remember starting with the strongest car, maybe in 2008, but generally we would be playing catch up. The team had a massive capacity to do that.

“I’ve still got a huge battle on my hands, making sure I’m on top of all the data and all the different settings and trying to do a better job.

“Nico is still leading the championship, and will be massively quick at every race we go to.

“I am sure Renault (power unit suppliers to Red Bull) will improve their engine for the next race, so we cannot stand still. We have to keep improving and I am sure we will.”

Unsurprisingly Rosberg is seen as the biggest danger to Hamilton this season and is priced at 4.00 to take the title, while four-time defending champion Sebastian Vettel is next best at 11.00

Topics: Bet on Formula One, Bet on Mercedes, F1 Odds, Formula One Betting